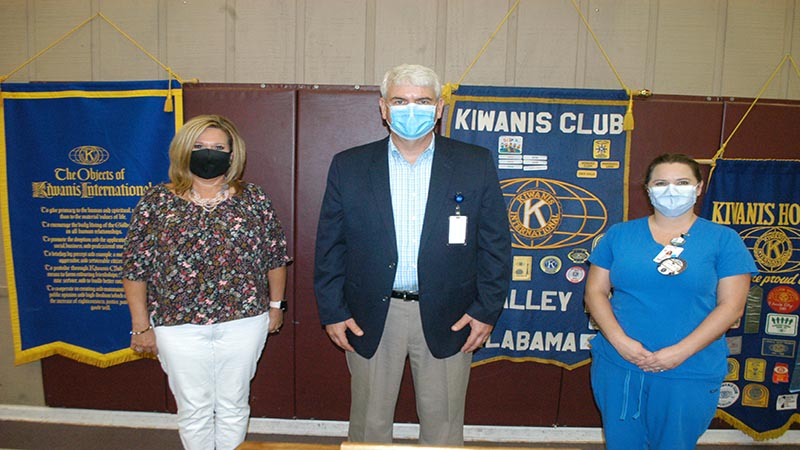 VALLEY — The first few weeks of the coronavirus outbreak was devastating for Chambers County with 35 people dying from it in March and April alone, but since that time the death toll has decreased.

Five Chambers County residents have died from COVID-19 since that time.

He said that part of his job is to sift through as much information as he can to get the clearest picture of where we are in terms of dealing with the COVID-19 pandemic. The United States leads the world both in confirmed cases (6.4 million) and deaths (192,000) from COVID-19, and Chambers County has had a total of 858 cases and 40 deaths. However, only five deaths have taken place over the last four months.

“People are more aware of COVID-19 now,” he said. “We’ve had more testing and have learned a lot about better treatments. More people are wearing masks, and that’s good. Masks work. I think we should continue to wear them until we have a vaccine.”

A recent rise in hospitalizations at EAMC-Lanier and EAMC in Opelika has Nichols concerned, but the rise is relatively small. The big concern is the coming fall when the weather turns cooler and more people are gathered indoors. He is encouraging everyone to get a flu shot before the weather turns cold.

“The hospital staff will be getting them in October,” he said.

Nichols said that he couldn’t say enough what a great job the staff had done under very difficult circumstances. He called it a great team effort, where individuals would pitch in and help out on their own in doing things that were not in their job description. If some help was needed in the cafeteria, for example, people with medical training would offer their help.

“I am so proud of the way our employees jumped in and did the teamwork that was necessary,” Nichols said. “They took on new roles on their own initiative.”

The staff was extremely conscientious in wearing masks and personal protective equipment.

“I don’t know of a single employee who contracted COVID from a fellow employee or a patient,” Nichols said. “We have had employees test positive, but they told us they had gotten it from outside the hospital setting.”

A positive test means isolation for up to 14 days.

Nichols encourages everyone to wear masks, practice social distancing, avoid gatherings and to “know how to feel it if you have it.”

“If you notice something different in the way you feel, if you are running a temperature that’s not normal for you or if you are coughing and that’s not normal, don’t be afraid to talk to a doctor about it. Everyone needs to be self-aware,” he said.

Nichols said that some people who have the virus may have only one symptom. He said that he’s heard of people having it and the only symptom they had was the loss of taste and smell.

The acute rehab unit at EAMC-Lanier has seen a number of people who have gotten past COVID but have to learn how to walk again. Some have been bedridden for weeks and weakened by the illness to the point where they had to regain their strength and work with physical therapists.

Nichols said he knows that people are tired of COVID but that it’s important to remember that it’s a deadly disease that we still don’t know a lot about.

“Our infectious disease expert at EAMC, Dr. [Ricardo] Maldonado has been studying the flu for 22 years and COVID-19 for five months,” Nichols said. “We are learning more and more about it each day, but our knowledge of it is still in its infancy. Dr. Maldonado said he first heard the name COVID-19 on Dec. 31.”

Every patient admitted to EAMC or EAMC-Lanier is given a 45-minute rapid test to see if they have COVID-19. While dealing with the COVID crisis, hospital officials have been planning for future improvements at EAMC-Lanier.

“We want to make it the best hospital it can be, and we are planning future investments. We are not slowing down,” Nichols said.

The first of several improvements will be an out-patient ambulatory surgery center. This will increase traffic in and around the hospital. In addition to local people, Lee County residents will be coming to EAMC-

Lanier for outpatient surgery. In many cases, EAMC doctors will be going to EAMC-Lanier to perform the surgeries. “We’ll soon be opening it,” Nichols said. “EAMC-Lanier will be a busier place because of it. We could triple our patient load.”

Something else on the way is something that’s commonly called a geriatric psych unit. This is a place where elderly people would stay for up to two weeks while a physician makes sure their medications are being properly taken. After this short stay, the older resident can go back home, to assisted living or to a nursing home, depending on where they’d previously been living. A psychiatrist would be coming several days a week to participate in the program.

There will be some coming improvements in the physical plant. Some of the hospital’s boilers and generators have been there since the hospital opened in 1950. An upgrade is long past due.

Nichols said that success is being reached in attracting family physicians to the local area. One of them, Dr. Hammond, is practicing with Dr. Fagan at the pavilion on Fob James Drive.

“We have another family physician coming next year and one the year after that,” Nichols said.

Nichols has been with EAMC for 17 years. He’s been the administrator at EAMC-Lanier for seven years.

“My family and I live in Chambers County,” he said. “We love the area and its people.”