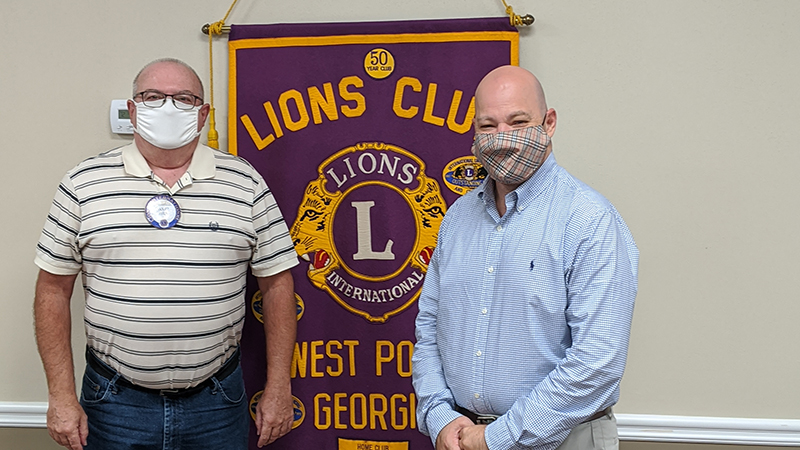 One of the more well-known faces across Chambers County is Joseph Kincaid, who is better known as Gator.

Kincaid is the owner of Gator Media, a news source that operates primarily on Facebook, and he was also the guest speaker at the Wednesday meeting of the West Point Lions Club. He spoke for a little less than 30 minutes about his journey from radio host to operating Gator Media, including the hard times in the middle.

Kincaid got his start in the Chambers County media at WCJM, a radio station that was located in West Point, in 2000. When he got the job, Kincaid was originally in Columbus, Georgia, which is the third-largest city in the state of Georgia.

“When you wanted to know what was happening, you would go to 100.9. It was everything,” Kincaid said. “When I got to the station, as a kid growing up in Columbus, I was blown away. We didn’t have that type of engagement at our stations in Columbus, as big as Columbus was.”

In 2014, Qantum Communications, the parent company that owned the radio station, sold WCJM to iHeart Radio.

“We were down. It felt like the band had disbanded for a very temporary time,” Kincaid said. “A lot of people really close to me know that I was depressed as anything because I thought on our watch, 50 years of this radio station has gone down the tubes. “I thought to myself ‘Lord, I don’t know how to fix this.’”

After the station was bought out, Kincaid stayed on with the station, which was moved from West Point to Opelika. The full-time staff was reduced. Kincaid went from full-time to a nine-hour a week voice tracker.

“That hit me in a few ways, financially and then the impact,” Kincaid said. “Here’s where faith comes in to play.”

Dealing with the frustration of the change in jobs and looking for more financial security, Kincaid decided that he needed a change in his profession. He decided to try to get his real estate license.

He failed the test three times.

“I’m driving back from Montgomery, and I was like ‘thanks a lot. I’m trying to make the best of a bad situation, and I can’t pass this test. I don’t know what I’m going to do,’” Kincaid said. “It was almost like that ‘aha moment.’ The sun was kind of in my eyes, and I heard God tell me ‘whoever told you that you need to do this? Did I instruct you? Am I telling you to follow?’ And the answer was no. He told me that ‘I’ve got a plan, you just have to trust this plan.”

Kincaid started to follow the plan that was laid out for him again in 2016, which was the same year that Facebook CEO Mark Zuckerberg launched Facebook Live, a service added to the social media site that allowed anyone to stream live video.

“I had the crazy idea that perhaps we can take news and run it through Facebook Live,” Kincaid said. “Great concept. Here’s the magic problem — now we have to get support.”

For his support, Kincaid turned to the community that he had been adopted into, Chambers County.

He went to West Point Mayor Steve Tramell with his idea.

“I had no pedigree. I had nothing to offer other than I will do my absolute best and show up to the council meetings and if you have anything else, I will show up,” Kincaid said. “I wasn’t some pioneer. I was just a guy that was looking for a job and thought perhaps this would fly.”

“It’s a tough business, but it is a beautiful business too because people respond to what you’re doing,” he said.

Because of his work with Gator Media, Kincaid has been named the Valley Times-News’ Reader’s Choice’s 2018 Local Media personality and was named the 2020 John Allen Smith Volunteer of the Year in August.