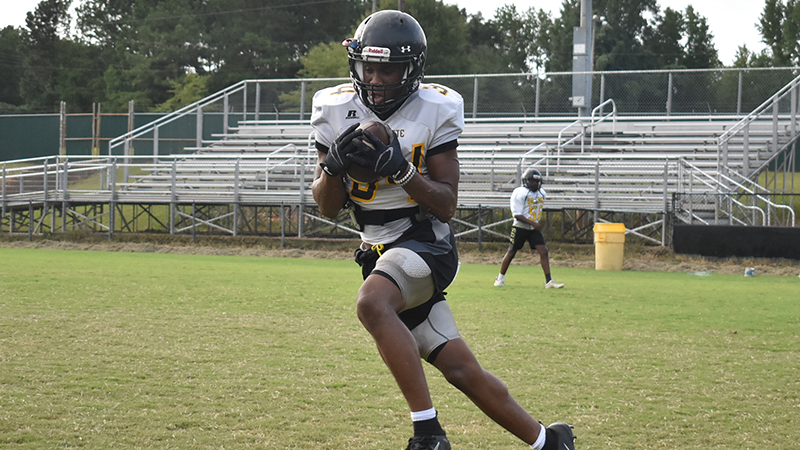 After having bye weeks for the first two slots on their season, the LaFayette Bulldogs traveled to the No. 2 team in 2A and held Randolph County for the first half and even midway through the third quarter.

“They didn’t quit,” head coach Juan Williams said. “Fatigue hurt us. We’re trying to work on that now, trying to make sure that we can have a better rotation [of players going] in and out, so our guys can have a little more in the third and fourth quarters. “We’re not going to make excuses. We just have to get better.”

In years past, the Bulldogs have primarily focused on the running game. In Williams’ offense, the Bulldogs were much more balanced in the first game of the season, nearly splitting the 337 yards of offense in half.

Running back Joshua Combs was a key force on offense, as the sophomore carried the ball just six times but gained 93 yards. He scored LaFayette’s lone offensive touchdown of the game, when he broke loose and scored a 52-yard touchdown run.

Quarterback Ty Daniel finished with 156 yards through the air and 77 yards on the ground.

“Ty Daniels managed a great game for us at quarterback,” Williams said.

The Bulldogs on defense played well, especially in the first half, but with a lack of depth and game conditioning, they faded in the third quarter, which is when Randolph County scored 21 of its points.

34 led all Bulldogs with 10 tackles in the game, while 57 added nine. Junior Tae Woody finished a team-high two tackles for loss for nine yards.

The biggest problem for the Bulldogs was their lack of depth, as a couple of starters missed the trip and practice due to coming in contact with COVID-19.

Both those players will be back on Friday after going through a full week of practice.

“When you don’t have but 30 players and you’re missing two, it feels like you’re missing the world,” Williams said. “The guys that stepped in for us stepped up and played awesome.”

The Bulldogs now turn their attention to B.B. Comer, who is coming off a 38-0 loss at Lanett in week three.

“They spread you out,” Williams said. “They have. A lot of athletes and are quick to the ball. The front line is very evasive. We feel that we’re in a mirror, they’re just like us. It’s going to be a good game. We’re going to see who holds out in the end.”

The Tigers have playmakers in every layer of their defense, which will make the Bulldogs’ balanced attack even more important than last week.

The Hornets are 1-1 on the season with a win against Childersburg. Overall, they are 4-2 against, with the last matchup coming in 2009.