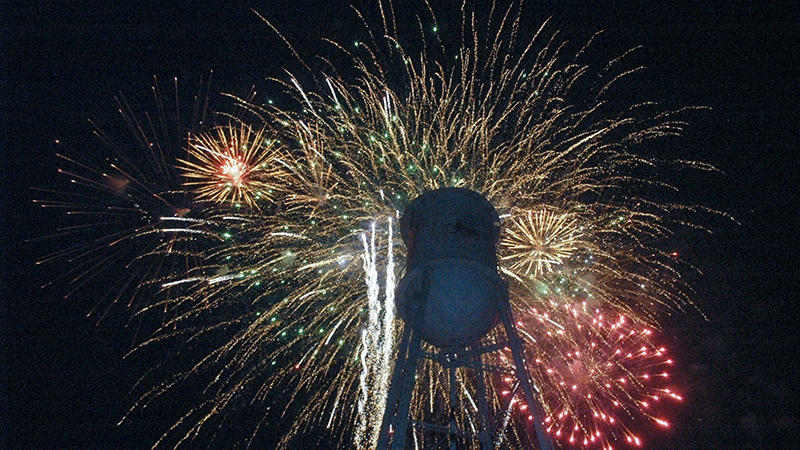 LANETT — It was later in the year than expected, but the City of Lanett celebrated its 125th anniversary Saturday night with a spectacular fireworks show over the Lanett Mill site.

“Casey Chambley outdid himself tonight,” said Lanett Planning Development Director Tony Chandler moments after the show ended. “This was the best one of his shows I’ve ever seen.”

Earlier this year the city had planned to have a fireworks show and to honor the 2019 state champion Lanett High football team, but the COVID-19 shutdown put a stop to it. Graduation took place and plans were altered to have the fireworks show on Labor Day weekend.

“The show was fantastic, and I am so pleased with the way everything went tonight,” said Mayor Kyle McCoy. “I thought it was appropriate we did this over the Lanett Mill site on Labor Day weekend. So many people from our city and the surrounding area worked there from the time the mill went into production in 1894 and until it closed in 2006.”

Chambley planned to start the show at 9 p.m. ET but had to delay it for a few minutes because of an agreement with CSX. The south-bound train that normally comes through West Point and Lanett at 8:30 on Saturday night was delayed for a half hour. Chambley had agreed with CSX to hold the start of the show until the train had gone past the mill site. That took place at approximately 9:05. As the slow-moving train sounded it’s hor for the South 10th Street crossing, it was almost as if the train crew was saying “Let’s get this show on the road!”

“One thing that really helped was the weather,” McCoy said. “We had a cool front come through, and the evening wasn’t as hot as it’s been. We had a really good turnout, and I was pleased with that. Family groups were able to spread out, and that was good for social distancing. You could tell everyone was having a good time. There was lots of applause and cheering between the more dramatic explosions in the sky.”

The launch site was behind the still standing water tank, which was frequently illuminated by the blasts of fireworks.

The city plans to keep the tank and the nearby nickel bus shelter as historic icons amid a new commercial development.

Tractor Supply is already in place as an anchor store for what could be seven to eight more new businesses to locate on the mill site in the coming years.

“I have gotten so many compliments on how well everything went,” the mayor said. “The traffic went well before, during and after the show. We don’t want to close down Highway 29 if we don’t have to. The only delay was to wait for the train and that was only for a few minutes. Since we have to put off our celebration of 125 years as a city for several months, we wanted everything to go well. “

The City of Lanett was chartered by the Alabama Legislature on Feb. 2, 1895.

The town had been known as Bluffton since 1865, getting its name from the heights overlooking downtown West Point. Since the 1830s, West Point merchants had been building homes there to escape the frequent flooding of the Chattahoochee River. Bluffton had five principal neighborhoods: Pine, Bridge, Rainey, Reese and Jackson. The name change to Lanett was done to capitalize off the growth of Lanett Mill and its nearby mill village. The name was created by combining “Lan” from Lafayette Lanier and “ett” from Theodore Bennett, an official with Wellington Sears, the Boston-based sales agency that marketed products being made in the West Point Manufacturing Company mills. Construction on a textile mill named “Lanett” began in 1892. The first yard of cloth (now on display in the West Point Depot and Museum) took place in July 1894. A second four-floor unit was added in 1900. The mill later had what was widely known as the world’s largest weaving area under one roof. What was then known as the world’s largest bleaching and dye plant went into operation in 1895.