Lanett gets back on track, runs over B.B. Comer 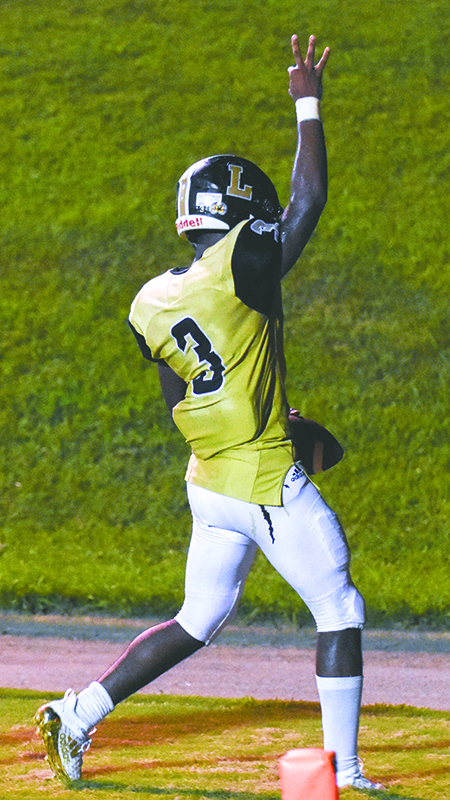 After losing to Valley in its last game, the No. 5 Panthers got back to playing Lanett football, in a 38-0 drumming of regional opponent B.B. Comer on Friday.

“Our offense moved the ball fluently,” Lanett head coach Clifford Story said. “Our defense played really well. We corrected a lot of things this week that we didn’t do last week.”

One of the areas that Story said the Panthers needed to figure out was the quarterback spot. The Panthers rotated in three different players in the first two games of the season before deciding on M.J. Atkinson.

The junior quarterback threw for 205 yards and a trio of touchdowns while completing 50% of his passes in the win.

“He was much better tonight. He was a little bit more poised,” Story said about the junior signal-caller. “He’s getting better. I’ve already told him that I’m going to hang my hat on him. It’s up to him to take the reins and be able to move us forward.”

Kadarius Zackery, who mixes in at receiver and quarterback, carried the ball six times for 45 yards and a touchdown. His touchdown came when he was lined up in the wildcat formation.

The Panthers held their senior night on Friday, and the senior Panthers made sure they would have a game to remember.

Kelvin Zachery led the team on defense, finishing with nine tackles and two forced fumbles. He also blocked a punt.

The Panthers defense has been its calling card all year, and that didn’t change on Friday, as Lanett was able to harass the Hornet quarterback and running backs for most of the game.

“That’s what we hang out hat on is defense,” Story said. “I’ve already said that we’re going to have to win some games this year on defense, and the guys have embraced it. They understand that defense is going to take us home.”

The biggest change from week two to Friday night was on special teams, as the Panthers didn’t struggle with snaps on punts against B.B. Comer.

“We had good snaps and good punts,” Story said.

One area the Panthers need to improve before next Friday is the number of penalties they allow. Story said his team had close to 15 penalties throughout the game.

“Those are things we have to clean up, but we’re young in a lot of areas, and they’re still learning the game,” Story said. “It’s to the point that we have to teach every phase of the game and every single detail of the game. In the past, we haven’t had to do that. We’ll get that part fixed and cleaned up.”