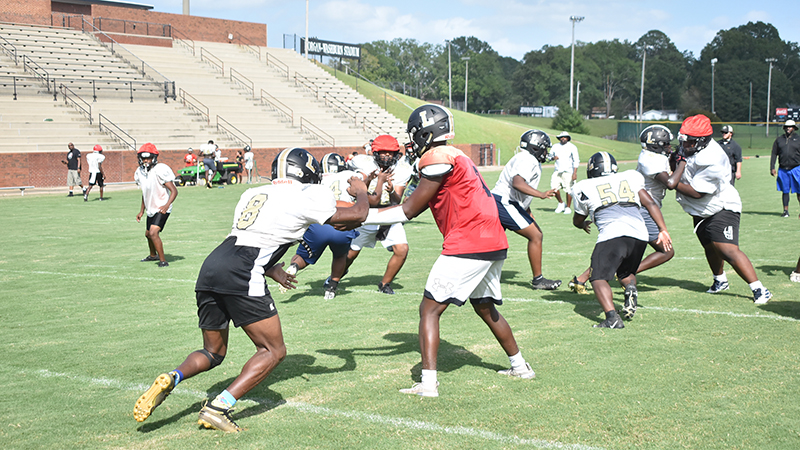 For Lanett head coach Clifford Story, a shutout win against B.B. Comer was the first step to getting back to playing Lanett football, but he is still not satisfied with where the No. 5 Panthers are at three games into the season.

“We’re just going to make sure that we focus on Lanett,” Story said. “We’re going to need to cut down on the penalties and continue to have a day like we did with only one turnover. We need to be able to reduce that one into zero.”

The only turnover in Friday’s win was a late interception. The Panthers blocked a punt and recovered the ball in the end zone for a touchdown on the ensuing drive.

The Panthers struggled to stay disciplined throughout the 38-0 win against B.B. Comer, drawing more than 10 penalties. Story said after the game that it was closer to 15, if not more.

To help combat that problem moving forward, Story and his coaching staff are going to be holding their players more accountable than the first couple weeks.

“We’re just going to continue to hold them accountable, continue to put a lot of focus on correcting those things,” Story said. “We just have to learn how to practice. Those are the things that get under my skin. We’re just going through the motions just to get by and are not putting in the effort that we need to be able to focus in when you’re hot, tired and when you don’t want to be here. We just have to get those things fixed, and if we get those things fixed, we’ll have a chance to go far in the playoffs. Right now, we’re just not practicing the way Lanett football is supposed to be practicing.”

In the years with Kristian Story and BJ Smith starting for the Panthers, running the ball was a major focus. While Kristian Story was a dominant passer, a lot of the offense started with the run-pass option. Coach Story wants his group to get back to that running attack that has been successful in the past.

Donnavin Sheeley has been the dominant runner in 2020 for the Panthers, as he leads the team with 173 rushing yards on just 24 carries.

Shealey has made strides in his pass blocking ability, especially picking up the blitz, which is one of the reasons he is a featured back in 2020.

“He’s put in the work and deserves an opportunity to play,” Story said about the senior running back. “He’s really developed. We’re comfortable with him running the ball now because he knows all phases of the running back position.”

In Friday’s matchup, the Panthers will host their second regional opponent of the year, when the Fayetteville Wolves come to Lanett.

Overall, the two teams have only matched up twice in program history, but Lanett has taken both games. The Panthers won the most recent matchup 42-7 in 2017.

“They play really hard,” Story said. “Coach [John] Limbaugh has done a great job. He’s been there for several years. They’ve had a lot of success under him.”

The Wolves are 1-1 on the season with their one win coming last Friday when they defeated region opponent Horseshoe Bend 14-2.

In their game against Horseshoe Bend, the Wolves’ defensive line was physical and caused problems in the running game. However, their offensive line struggled in the game and allowed a decent number of sacks.

With a Panthers’ front seven that likes to attack the ball and blitz the quarterback, the Wolves’ offensive line will be tested on Friday night.

“It’s another big region game,” Story said. “Every game on the schedule is going to count, so we’re going to make sure that they are locked in and focused. The Wolves have a good football team.”

Kickoff is set for 8 p.m. at Morgan Washburn Stadium.

Lanett gets back on track, runs over B.B. Comer