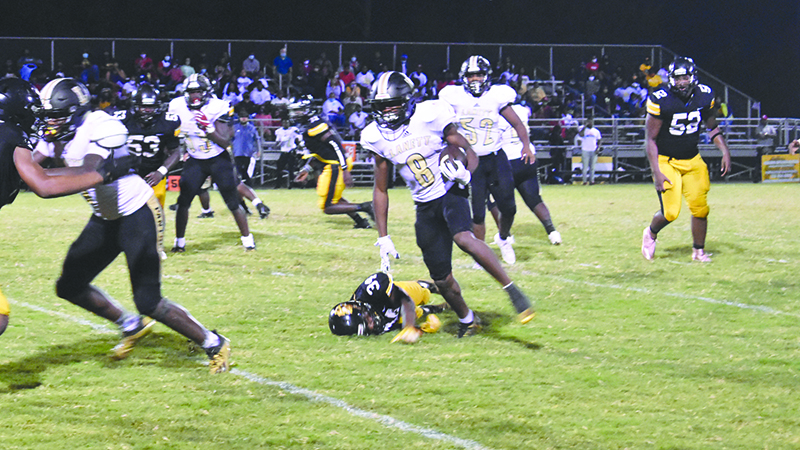 The No. 5 Lanett Panthers spoiled the LaFayette senior night on Friday night, defeating their rival 26-0.

“I knew it was going to be [a tough game],” Lanett head coach Clifford Story said. “Anytime you play a big rivalry game, you’re going to have your ups and downs. It’s just a game where you make a lot of mental mistakes because you talk so much about it. At the end of the day, we were able to capitalize on a few mistakes they made.”

The Panthers received the opening kickoff but struggled to get their offense going at first, failing to reach the first down before fourth down. An offsides call saved the drive, advancing the Panthers to their 45-yard line. On the very next play, quarterback KK Atkinson hit Makel Patrick on a screen pass. Patrick did the rest of the work, charging ahead for a 55-yard touchdown.

The Panthers added to their lead early in the second quarter when senior return man Kadarius Zachery caught the ball at his own nine-yard line and sprinted down the left sideline 91 yards for the touchdown.

The closest the Bulldogs got to the end zone was late in the second quarter. The Bulldogs drove down to the Panthers 30-yard line and were poised to strike for their first points of the game, but Patrick was able to come up big for the Panthers, intercepting a pass in the end zone, right in front of a Bulldog receiver.

Patrick’s interception not only kept the shut out alive, it gave the Panthers momentum heading into the second half.

The Panthers added to their lead in the fourth quarter, scoring on a 38-yard touchdown run by D’Quez Madden and a 32-yard run by Zackery for the game’s final points.

The Panthers were able to score on long plays but for the most part, the game was a defensive slugfest that had a lot of big hits and solid coverage.

For the Panthers, they finished with four interceptions and numerous plays in the backfield. On one of the Bulldogs’ drives in the third quarter, they started at their own 49-yard line. The Panthers’ defense drove them back all the way to their own 21.

“You can’t play like that against good teams,” LaFayette head coach Juan Williams said. “The last time it happened it was the same result [a 22-19 loss to B.B. Comer in week four]. Lanett has a good team. When you meet a good team, you can’t have a game like that.”

Zachery had a huge game for the Panthers. For most of the night, he was making plays around the field. Along with his two touchdowns, the senior finished with two interceptions, cutting Bulldog drives short.

“I’ve been telling him that he’s going to have a breakout game, but for some the first few games he’s just been holding back,” Story said. “He’s just a different makeup. He’s a game-changer.”

One player that stepped up big time for the Panthers was junior outside linebacker Jay Gibson.

Gibson was flying around the field to the football, making numerous plays at or behind the line of scrimmage.

“When the play needs to get made, he’ll make the play,” Story said.

The Bulldogs, who normally are a strong running team, couldn’t get anything going on the ground. Quarterback Jay Daniel was under constant pressure while running backs Tamariunte Moore and Joshua Combs struggled to find gaps.

“We didn’t block. We have to learn how to block,” Williams said. “You can’t run a play if you can’t block. They’re good upfront. We have to take this and get better from this.”