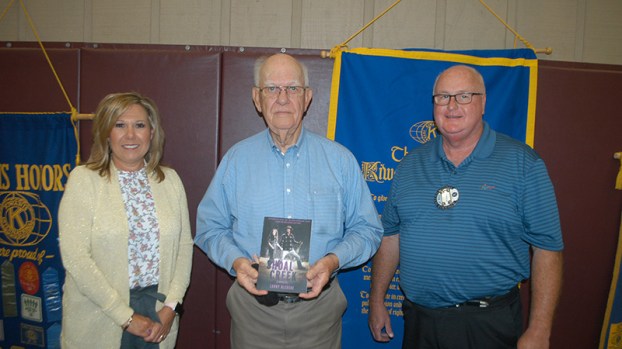 Lanny Bledsoe talks about his book, sequel at Kiwanis

VALLEY — Lanny Bledsoe’s first novel, “Shoal Creek,” got so many favorable responses that he’s written a sequel. He sent it to an editor on Monday and it should be published by Amazon in the near future.

Bledsoe talked about his writing experience at Wednesday’s noon hour meeting of the Kiwanis Club of Valley, held in the family life center of Langdale Methodist Church.

“I had thought about doing something like this for a long time but didn’t have the time to sit down and do it,” he said. “I had that time when my wife, Karen, and I were staying at home because of COVID-19. “

Shoal Creek is a work of fiction but is loosely based on actual events that took place in and around the River View community more than a century ago.

“I grew up in River View and heard lots of stories from the older men in town,” he said.

One of those stories involved three men from the River View area who crossed the Chattahoochee River in a bateau in 1915 and landed their boat at the mouth of Flat Shoals Creek. They went up the creek by foot to a large farm in Harris County, where they purchased some moonshine whiskey. They were never heard from again. A few days later their bodies were found in the river tied together with ropes around their necks. No one was ever charged with the killings, but the story has been chronicled over the years in The Atlanta Constitution as one of Georgia’s more notorious unsolved murders.

Another member of the Sands family, Leon, was quite a storyteller. Bledsoe said he can remember him talking about men from River View crossing the river to Flat Shoals Creek by boat, walking up along the creek to a farm and being scared of snakes all the way up. They’d sometimes return after dark “being so liquored up that the snakes were scared of them.” They’d improvise a flashlight to see their way through the dark. They’d place a rag at the mouth of a glass bottle containing moonshine and light it.

Bledsoe is pleased with the many positive comments he has gotten on Shoal Creek. He’s heard from people from all across the U.S. Most of them are from the Southeast, but some are from as far away as Iowa and California.

He said he thought it would be a man’s book because it was about the river, fishing, hunting and the central character, Rep, living off the land for an extended period.

“I have been surprised that so many women have told me they liked it,” he said. “One of Karen’s friends told her that it had some words in it they thought they’d never hear from me. You’ve got to remember that it’s a work of fiction with some bad people in it. That’s the way bad people talk. I was in the Marine Corps for five-and-a-half years and have probably heard every bad word ever spoken.”

“When you write a book you have to have two types of people,” he continued. “There’s the protagonist, or the good guy, and antagonists, or the bad guys. If everyone were good guys or bad guys, it would be terribly boring. You have to have conflict to make it interesting.”

The Shoal Creek protagonist is a young man named Rep. He was growing up amid terrible deprivation when he decided at age 15 that he wasn’t going to take any more beatings at the hands of his drunken father and left home for good. He drifted north from his south Georgia home for four years before finding Shoal Creek Farm. He survived by finding work on farms, with a logging crew or living off the land.

He would find plenty of trouble at Shoal Creek Farm, especially from a young women named Lila who was spoiled and would not take no for an answer.

Bledsoe said that he’d learned a lot about the publishing business in getting Shoal Creek published.

“If you want something that’s going to be sold in stores like Books A Million, it might take up to three years to do it,” he said. “At my age, I might not have three years left. It was much quicker for me to do it through Amazon. I had the help of an editor, who made sure it was organized the right way and grammatically correct. He was very helpful. He put it in the right form to be published. He’d had lots of experience in doing this. It took him three months for the rewrite and two more months to organize it in the right form. There are many specialists in the publishing business. Some people do the editing, some design covers and some do the writing on the covers.”

The Shoal Creek editor has had an interesting year in 2020. He normally spends his summers in Montana and his winters in Argentina. Because of the pandemic, he hasn’t been permitted to re-enter the U.S. and has remained in Argentina. Even at long distance, he was able to help Bledsoe with Shoal Creek.

“Writing Shoal Creek and the sequel has been a really interesting experience,” Bledsoe said. “We’ll be advertising the first book on Amazon before we get the second one out. Shoal Creek is also available on Kindle. Some people have told me they have read it there.”

Bledsoe said it’s very easy to find anything about the book.

“Just go to the Amazon website and type in Shoal Creek,” he said.

The two young people on the front cover are his grandchildren, Josh and Mattie Bledsoe. The front cover has been redesigned for a second printing.

“The lettering will be easier to read,” Bledsoe said. “The cover photo will remain the same.”

Bledsoe said he started writing the sequel not long after he finished Shoal Creek.

“People were encouraging me to do it,” he said. “It didn’t take me as long to finish the sequel as it did Shoal Creek.”

Bledsoe is the commander of American Legion Post 67. They haven’t met since COVID began. They did host a Memorial Day program in Veterans Park and will likely have a Veterans Day program in November.

“We don’t have many World War II veterans left,” he said. “We have lost some of them this year. We are also losing veterans from the Korean War and Vietnam.”