Panthers aim to get back to Lanett football standards 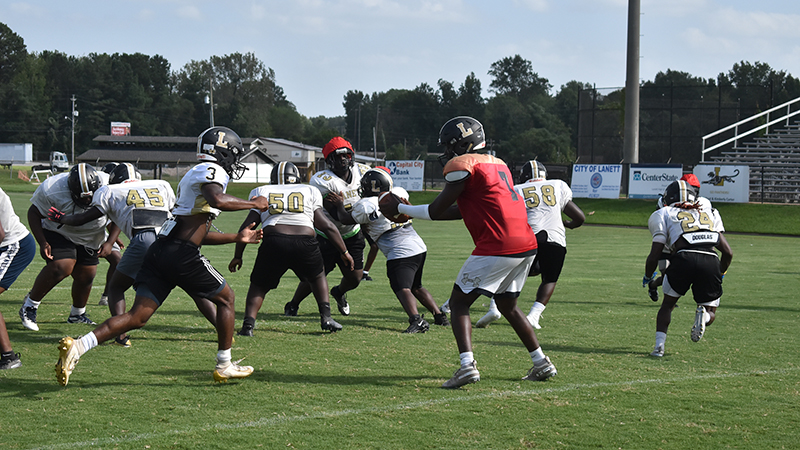 After suffering his first regular-season loss since Aug. 24, 2018, Lanett head coach Clifford Story said after the Valley game that he was going to get the 2020 Panthers back to playing Lanett football.

The process started Sunday, which Story called the correction day. The Panthers worked on holding on to the ball and making routine plays that they were not making in Friday’s game.

On Monday, the Panthers finished their corrections from the week before.

Tuesday, Story said his team had a great day of practice, which was the first day the team started to work on regional opponent B.B. Comer.

On Wednesday, the Panthers went back to their normal schedule and worked on various situations and different calls, something Story usually likes to practice on Wednesdays.

Thursday was the team’s normal walkthrough.

“We went over everything that we’re supposed to do to clean up all the mistakes that we made last week,” Story said.

“I feel that he can get it done,” Story said.

Caden Story will primarily move back to his spot on the defensive line, where he is a four-star prospect by all major recruiting sites and will backup senior tight end Trey Abner.

Zackery will be the backup quarterback.

“Kadarius Zackery will be getting some reps at quarterback because of his speed, his explosiveness and the changeup he brings to the game,” Story said.

The Panthers are 11-2 all-time against the Tigers. The last time the two teams matched up was 2005, which was the final time the Tigers were a 2A team before the most recent realignment.

The Tigers defeated 4A 30-6 last Friday.

“We’re going to have our work cut out. It’s not one of those games that will be over at halftime,” Story said. “They have a second-year coach, that has coached at the big level. He understands what it takes to win. The way that his kids played against a much larger Childersburg team, lets me know that they’re going to compete.”

The Tigers, like the Panthers, have playmakers on every level of its defense, most of which are important players on the offensive side of the ball.

Friday’s game also starts the Panthers’ region schedule. Lanett is riding a 19-game region winning streak, dating back to the start of 2017.

“The region sets up for playoff,” Story said. “You don’t ever know how the playoff is going to work. We want to start out 1-0 [in the region] and give ourselves a good position moving on to next week against Fayetteville. We’re going to have our work cut out for us, but I think our kids understand what’s at stake.”

“I want to see them go out, compete and work extremely hard,” Story said. “I want them to show me that we can play Lanett caliber football. They have had a great week of preparation. B.B. Comer is going to be a great team.”

The Panthers will hold their senior day 30 minutes before kickoff, honoring the nine seniors on the roster.

“We’re going to have senior night early because with this pandemic, we just never know and we want to make sure our seniors get recognized,” Story said. “They’re going to be missed. I have a lot of guys that are in that class that have been with me since they were eighth and ninth graders. Those guys are close to my heart because they’ve been with me through thick and thin. They understand the program and how everything works. To see them leave, it’s going to be disheartening, just like all my other senior classes, but they’re a special group of young men. They’re two-time state champions with the possibility of getting a third.”