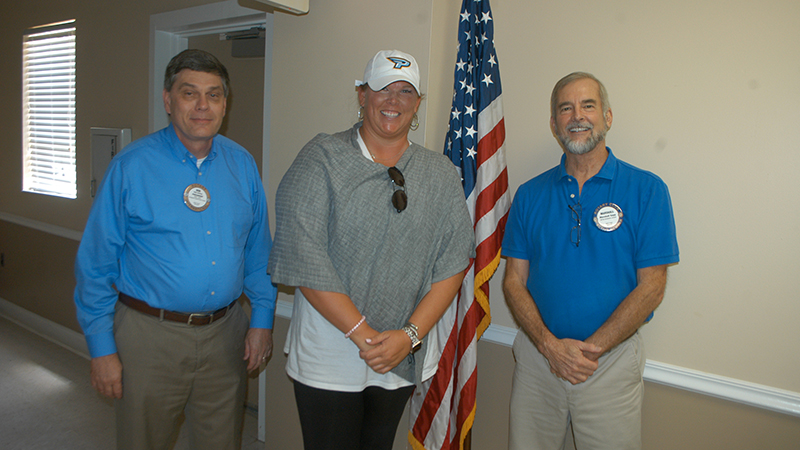 LANETT — Point University has a very active athletic program – there are 19 men’s and women’s sports – and when it all shut down abruptly due to COVID-19 in the middle of March a long, slow process began to of get back to normal. Assistant Coach Sarah Warren talked about what the school’s softball team had been going through at Thursday’s noon hour meeting of the West Point Rotary Club.

Skyhawk football will be delayed until spring, but the other fall sports are moving forward. This includes women’s softball.

The Lady Skyhawks have been going through routine conditioning and will start practicing for the 2020-21 season next week. Their first game will be on Oct. 17. They compete in the Appalachian Athletic Conference (AAC), the private college equivalent to NCCA Division II.  Players and coaches can’t wait to get the season started.

“COVID has been weighing a lot on our kids,” she said. “It has been life changing for all of us. There’s no perfect system to get through what we have all been dealing with. We have taken part in lots of ZOOM casts, and I have had lots of phone conversations with the players making sure they are comfortable with what we are doing.”

There’s currently an estimated 800 students near the West Point campus or at Abbey Glen near Kia. More than 80 percent of the students take part in athletics in some way. This includes those who are in cheerleading and the marching band. Warren said the university has done a fantastic job of sanitizing the buildings to keep everyone safe.

“I want them to know that when they are on campus they are safe,” she said. “There has been so much done to ensure this. Remember, though, they are college kids, and they will do what college kids do.”

Thus far, there have been seven confirmed cases of COVID-19 among Point University students.

“Everything has to be sanitized every day, even the balls and bats,” Warren said. “I keep thinking what would happen if we skipped one day. What would happen to the kids? We can’t take that chance. We have to keep them safe. We have been up and down this year, and we are now ready to roll.”

There’s a sense of family among the young women on the team. Warren cites the example of a young woman from California who played two years for the Lady Skyhawks after transferring from a junior college. Not long after graduating she tragically passed away.

“We had a celebration of life for her and contacted as many of her former teammates as we could,” she said. “They were widely scattered by then but 23 or 24 of them came back to do that for her.”

Warren thanks local churches for the support they have given the team.

“It’s so good to have them behind us,” she said. “They are good about packing the stands for our home games.”

Point athletes come from all over the world.

“They look like any other student, but when they open their mouths you know they are from somewhere else. There’s nothing else like an Australian accent, and we have some of those.”

“Our kids come from very different backgrounds,” she added. “Some are preacher’s kids and some have never been to church a day in their life. We think that being at Point is a good experience for all of them. It’s a four-year liberal arts university. Students can major in a wide variety of subjects, but they all have to minor in biblical studies.”

“We had to tell our players that the season was over,” she said. “It was especially hard for the seniors. They had no idea if they’d ever play again.”

It turns out that they can play again. The athletic conference is allowing another year of eligibility for those impacted by the shortened season. Because of this, the team has some holdovers from last year the coaches weren’t expecting along with 12 junior college transfers and true freshmen that have been recruited to play.

Being the daughter of a physical therapist, Warren has a world of respect for athletic trainers. They get there a couple of hours before everyone else and stay hours after everyone leaves.

“The athletic trainer is a special person,” Warren said.

They will have more players to take care of this year.

Warren has been with the Point program for ten years. She and head coach Jennifer Perkins Tyler will be working with 26 players from many different places, all of whom want to do their best for Point.

There is one local player on the team this year. Allie Davis played her high school ball at Springwood. Several Valley High girls have gone through the Lady Skyhawk program and have graduated. They include Ryan Simpson, Brooke Williams, Madison Brown and Kelsey Davis. Many of the women on this year’s team played their high school ball in Alabama. Being located so close to the state line makes it natural to recruit the state.

“The state line runs right through our main parking lot,” she said. “How often does that happen at a college?”

Being the far south member of the AAC, Point teams travel a lot.

“I tell our girls to love our charter bus,” she said. “We are going to be on it a lot. There are some days we will be on it up to eight hours.”

That’s just coming and going. Some of those trips involve double headers.

A native of Chattanooga, Tennessee, Warren signed with Auburn to play for coach Tina Deese. She was a six-foot-two pitcher who could really hum the ball but had a career that was short lived due to injuries. In the first week at Auburn, she tore her ACL. She’s had a total of 10 surgeries since then and at age 34 went through total knee replacement.

“I love everything that goes with athletics. I love to compete,” she said.

After leaving Auburn, Warren played two years at Chattanooga State and one year at Lee University before earning a degree in education at the University of Tennessee-Chattanooga (UT-C).

Lee University is a small Christian school in Tennessee. Warren said that she enjoyed her time there and is now enjoying being at another Christian college, Point University.

She said that people from urban backgrounds don’t understand what it’s like to live in a small town.

“The first house I rented when I got here was at Quail Run,” she said. “When I would tell people it was 12 miles away from campus, they would think it was far away. They didn’t understand that I could drive the whole way without having to stop at a red light.”

Warren has family ties to the west central Georgia region. Her mom grew up on a farm near Pine Mountain.

“We went there a lot when we were kids,” she said. “My grandparents retired and moved to Florida. Several years ago, my sister wanted to go back to that farm. We drive there and sure enough someone is still raising pigs there.”

Warren is hopeful Point will be coming through COVID much better than some might have thought.

“We have had a small decrease in enrollment this year but nothing like some may have expected,” she said. “Our dean of admissions is considering it a win.”

Coaches Tyler and Warren talk to their players a lot.

“They need to understand your expectations of them,” Warren said.