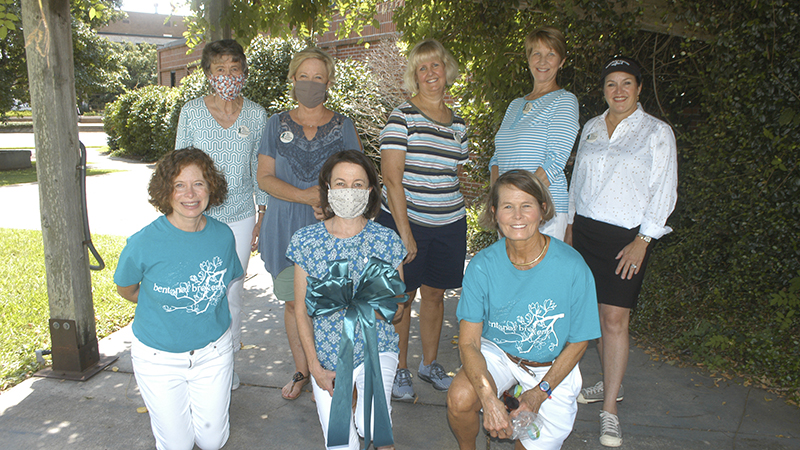 Friends of the late Lori Fawbush put up a ribbon in her memory at J. Smith Lanier II Park in downtown West Point on Tuesday, the first day of Ovarian Cancer Awareness Month in the U.S. Fawbush died of ovarian cancer in April 2018 but not before putting up a courageous fight and spreading awareness of the disease with teal ribbons. Shown above, kneeling from left, are Michael Andrews, Jenna Brown and Martha Scott. In back, left to right, are Sister Huguley, Linda Humphrey, Elizabeth Lester, Deborah Rearden and Lee Parr. --Wayne Clark

WEST POINT — A group of local women gathered in J. Smith Lanier II Park in downtown West Point during the noon hour on Tuesday to place a ribbon in observance of Ovarian Cancer Awareness Month. A banner proclaiming the month will soon be going up in the park.

The ribbon is teal in color and is in memory of their friend, Lori Fawbush, who died of ovarian cancer in April 2018.

She touched many lives before her passing and left some wonderful memories for her friends, who were moved by her loving nature, passion to help others and tireless efforts to promote awareness of ovarian cancer.

“She was a member of the Teal Magnolias in Opelika and was active in all their projects,” said Martha Scott. “We used to help her putting up teal ribbons on Highway 29 in West Point, Lanett and Valley. She kept bags and bags of those ribbons.”

More than 20,000 American women are diagnosed with ovarian cancer every year. Early detection is critical to surviving it. According to awarenessdays.com, if a woman is diagnosed in the earliest stage, her chances of survival is 90 percent. If it goes undetected for a year or more, those chances drop to less than 50-50. According to the Centers for Disease Control and Infection (CDC), an estimated 24,000 American women will die of ovarian cancer this year.

Regular medical check-ups and knowing the risk factors that rise with advancing age are important steps women should be knowledgeable of.

Ovarian cancer can strike women of all ages, races and backgrounds. Many well-known actresses have been touched by it. Jessica Tandy, who received an Academy Award for her role in “Driving Miss Daisy” died of ovarian cancer at age 85 in 1994. She was also nominated for the Best Supporting Role for an actress for “Fried Green Tomatoes” in 1991. Her co-star in that film, Kathy Bates, has survived both ovarian cancer and breast cancer. She won an Oscar for her role in “Misery” in 1990. Well-known actresses such as Loretta Young and Madeline Kahn died of ovarian cancer.

The National Ovarian Cancer Coalition is having an awareness campaign this month. The focus is on early awareness of symptoms, genetic predisposition and having better early detection tests. For more information, go to ovarian.org.