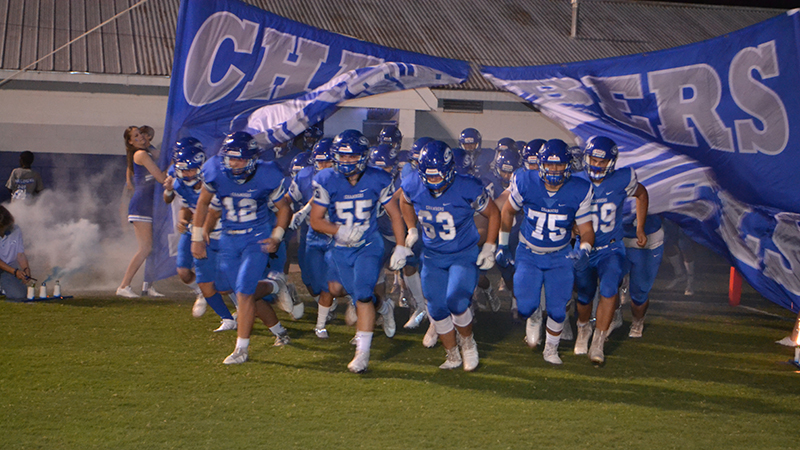 LaFAYETTE — The Chambers Academy Rebels went to 5-0 on the year Friday night with a 46-7 win over the Valiant Cross Warriors on homecoming night at Torbert Field. Coach Jason Allen’s team took care of business early, scoring on three first-quarter possessions and getting three two-point conversions to lead 24-0 at the end of the first period of play. They added two more scores in the second period to lead 38-0 at the half and in a time-limited second half exchanged scores with the visitors to score a 46-7 win.

Even by his high standards, senior quarterback Payton Allen was exceptional, and junior wide receiver Jeremy “Spud” Conway had his best game to date, catching two long touchdown passes and having a long punt return for a score.

Allen completed 12 of 15 passes for 256 yards and two touchdowns, both to Conway. He also ran for two scores and had an interception on defense.

Conway caught three passes for 114 yards and had a 52-yard punt return for a score.

“I thought we played an efficient game tonight,” said Coach Jason Allen. “We did pretty much what we wanted to do on offense, and our defense continued to play well. I am well pleased with the play of our defense. They are playing at a very high level right now. Our two defensive ends were our leading tacklers. Jacob Oliver had eight tackles and Kross Colley had six. (Linebacker) Dean Sheffield also had six tackles.”

The dominating win by the Rebels sets up a huge game next Friday versus Pike Liberal Arts.

“It will be the biggest game in AISA next week,” said Coach Allen. “They might be the strongest AISA team in the state. They picked up a lot of players over the summer and deservedly have a high ranking.”

Pike is currently ranked No. 4, while the Rebels hold down the No. 2 spot in AISA.

Friday’s began in an unusual way, and the homecoming night crowd absolutely loved it. A helicopter circled the stadium several times as announcer Jonathan “Moose” Mapp told the crowd that the pilot, Chambers County Sheriff’s Department Chief Deputy Richard Carter, had been the starting quarterback for the Rebels in 1985. He hovered the helicopter very low over the field and tossed out the game ball to Coach Allen, who was Chambers starting QB in 1992.

“I sure didn’t want to spoil the opening by dropping it,” Allen said. “I’m glad I was able to hang onto it.”

Chambers received the opening kickoff and drove it 76 yards for the game’s first score. Payton Allen had some amazing plays on the drive, scrambling all over the field before finding open receivers for big gains. He capped off the drive by scoring on a 17-yard run off the left side. He passed to Josh Holliday on the conversion to add two more points. With 9:13 showing in the first quarter Chambers led 8-0.

The Rebel defense completely stymied the Warrior offense on their first possession, forcing a punt on fourth and 15 on the 19. Conway fielded the ball just past midfield and followed some good blocking on the right side of the field, racing 52 yards for the score. Jordan Benbrook powered off the left side into the end zone for two more points on the conversion. With 7:34 left in the first quarter, Chambers led 16-0.

Valiant Cross moved the ball past midfield on their next possession but turned it over on an interception at the 30.

Very quickly, the Rebels put eight more points on the board. Benbrook ran it in off left guard on the conversion to make the mounting score 24-0 with 3:27 still to play in the first quarter.

The Rebels scored again early in the second period, this time taking it 74 yards. On a third-and-seven play from the 13, Allen kept the ball off the right side for his second TD run of the game. Jeremy Pollard added the extra point to make it 31-0 with 10:33 left before halftime.

Later, a run by sophomore Gavin Kight got it closer on the next two plays before Benbrook took it in for the next score. Pollard’s PAT made the score 38-0 with 1:25 left in the half.

With the game clearly decided, the officials didn’t stop the clock a whole lot in the second half.

During the second half, Chambers added a 77-yard TD pass from Allen to Conway.