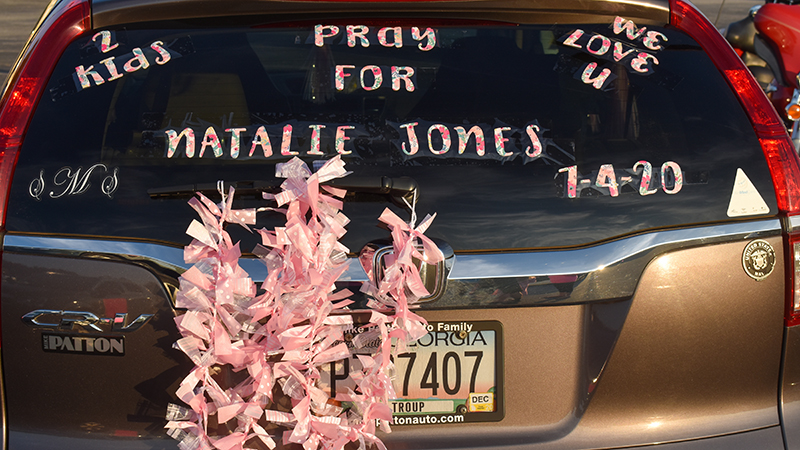 As the sun set over LaGrange Saturday night, more than 50 people met at the Big Lots Parking Lot on Commerce Avenue. Riding motorcycles or driving cars decorated in pink, they were there to raise awareness about the disappearance of Natalie Jones, a 27-year-old mother of two who has been missing since July.

Jones, formerly Natalie Sheppard, was last seen on July 5, around 1 a.m. near Jackson’s Gap, Alabama, wearing a pink blouse with white shorts and black sandals with a bow, according to the Heard County Sheriff’s Office. Jones has tattoos, including “Isaac” on her left wrist, “Trent” on her right wrist and a star diagram on her back.

She is 5 feet, 3 inches tall and weighs about 130 pounds. She has blue eyes and brown, below-shoulder-length hair with blond highlights.

Jones drove a 2002 Chevrolet Cavalier with Georgia license plate RVE6177. The car is hot pink (pink is Jones’ favorite color) with a blue stripe along the side of the car. The car has not been seen since her disappearance.

Jones is diagnosed as bipolar and schizophrenic and was not on her medications at the time of her disappearance, HCSO said.

Anyone with information about Jones is asked to call the Georgia Bureau of Investigation, Heard County 911 or HCSO Lt. Dan Boswell at (706) 675-3329.

Jones’ disappearance has received widespread media coverage from outlets across Georgia, as well as national outlets, from People magazine to the Dr. Phil Show. There are multiple Facebook pages and groups where users speculate about what may have happened to her. But the HCSO has said it’s pursued hundreds of tips and leads, none of them fruitful.

Jessica Bishop, one of Natalie’s sisters, helped organize the ride. She said the family wanted to “bring it [the case] back to life” and said the waiting has been torture.

“I really don’t want to speculate because really, we don’t we have any idea. You know, there’s been so many theories that people have thrown out. It’s just all over the place. So, we really just don’t know,” Bishop said.

Many of the attendees were members of Change Church in Grantville, Georgia. Some of them — the F.A.I.T.H. riders — ride motorcycles to raise awareness and funds for various causes.

“We don’t want anyone to think anybody’s given up on Natalie. So, we come out as a sign of hope today,” Boyd said.

“She’s a good mother,” Boyd said. “She loved her kids with all of her heart.”

Sharee Martin knows Jones through her church, where she used to sit catty-cornered to Jones. She hasn’t seen her since before COVID-19 hit, after which the church temporarily closed.

“Natalie was real sweet and always had her sweet smile. Real sweet smile,” Martin said. “And so we just felt like we ought to support her. … It’s just devastating. And, we’re just friends. I can’t imagine [being] family.”

Shortly after 7 p.m., the group, escorted by the Troup County Sheriff’s Office, left the lot and drove for about 20 miles to a prayer vigil in Franklin, Georgia. They arrived at a baseball field complex off Franklin Parkway, bordered by Glover Road to the west and the Chattahoochee River to the east.

At the baseball complex, family members thanked attendees for showing up, and Boyd gave a speech.

“Please do not stop praying for our sister to come home to us,” Tabatha Jones, another of Natalie’s sisters, told the crowd. “I cried on the way over here, y’all, because it just surprises me that so many people care. And I just want to say thank you so much.”

Despite the lack of progress on the investigation, Boyd asked the crowd to keep spreading the word and to have faith.

Until evidence is found to the contrary, Boyd said he’s going to keep praying and believing that Jones will be found.

“One thing I know about Natalie. She may be in trouble physically, but her soul is eternally secure,” Boyd said. “She loved the Lord, she had a relationship with Jesus, she trusted him. So, no matter what’s going on, God is with her in her valley and in her struggle.”