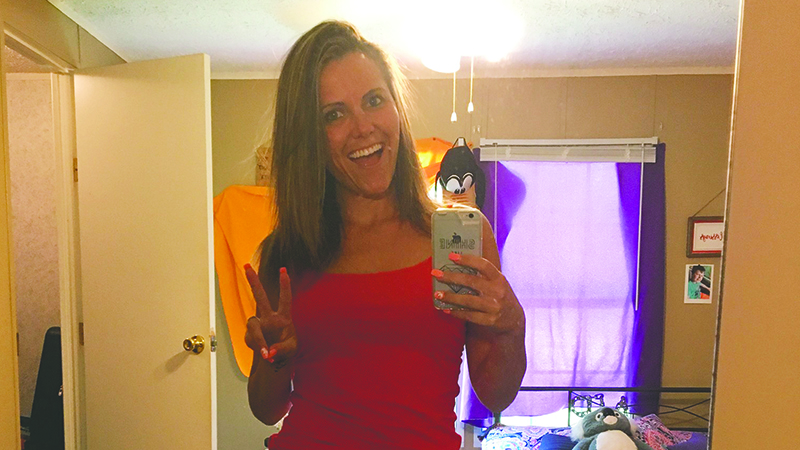 Natalie Jones has been missing since the weekend of the Fourth of July. -- File Photo

It’s been two months since Natalie Jones went missing, and the Heard County Sheriff’s Office is still looking for leads in her disappearance.

Jones, formerly Natalie Sheppard, 27, was last seen on July 5, around 1 a.m. near Jackson’s Gap, Alabama, wearing a pink blouse with white shorts and black sandals with a bow, according to the HCSO. Jones has tattoos, including “Isaac” on her left wrist, “Trent” on her right wrist and a star diagram on her back.

She may be traveling in a 2002 Chevrolet Cavalier with Georgia license plate RVE6177. The car is hot pink with a blue stripe along the side of the car.

Jones is diagnosed as bipolar and schizophrenic and was not on her medications at the time of her disappearance, HCSO said.

She is 5 feet, 3 inches and weighs about 130 pounds. She has blue eyes and brown, below-shoulder-length hair with blond highlights.

According to Lt. Dan Boswell, the HCSO has followed up on every tip they’ve received, but all have come to dead ends. “We’ve received a bunch of tips on pink cars, but none of them have led to the discovery of her car,” Boswell said. “I’m still working with the GBI, and we’ve been out interviewing people, and just running down all these tips that we get. Unfortunately, none of them has led to any valid information as to why she has disappeared.”

Jones’ ex-boyfriend, Jonathan Lawrence, was arrested last week on unrelated charges after allegedly soliciting the murder of a deputy working for the Troup County Sheriff’s Office.  Lawrence was charged with criminal attempt murder by the TCSO.

Boswell said there is currently no evidence that links Lawrence, or anyone else, to Jones’ disappearance.

“We have looked at anybody that she’s had a relationship with,” Boswell said.

“He happened to be one of the individuals we looked at. There’s a lot of theories out there about what’s happened to Natalie, and some of them are really far out, but we don’t have a crime just yet. If you wanted to come up missing and not be found, it’s not against the law for that.”

Boswell said Jones lived in Hogansville for many years and has visited it frequently in the past.

“We are looking at every tip, and we want people to call us with valid information,” Boswell said. “That is what we are looking for, valid information in relationship to her disappearance. We want to emphasize that if people see her car, no matter where the jurisdiction is, call that local jurisdiction. If you call me here at the HCSO and you see the car in Troup County, I can’t respond fast enough to another area whereas local law enforcement can.”

Jones’ disappearance has gotten nationwide coverage, including being featured on the Dr. Phil Show. Boswell said law enforcement in the southeast and surrounding states are aware of the missing person case.

“I really wish I could give a good update like we’ve got better information, but we just really haven’t received any good information,” Boswell said.