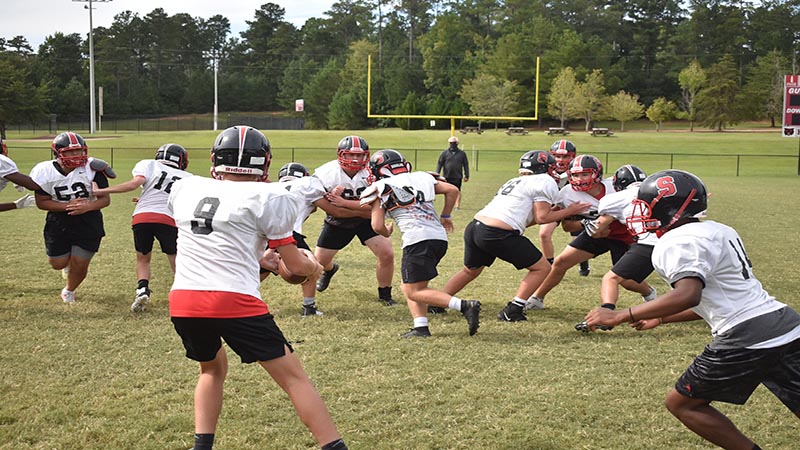 Last Friday, the Springwood Wildcats played one of the hardest  games, if not the hardest game of their schedule, when they traveled to Glenwood.

The Wildcats struggled against the Gators, who lived up to their No. 1 ranking.

“Glenwood has a great team. They may be the best team in AISA. They’re one of the best teams I’ve coached against in a while,” Head Coach John Gartman said. “Sometimes you play a team that good and it’s hard to find a lot of bright spots. We did what we could against them. Hopefully, we got a little bit better against a good team. Hopefully, we can carry that into next week.”

The bright spot for the Wildcats was in the second half. With a running clock, the Wildcats could only have a couple of possessions, but they were effective drives.

“We did execute better on those [second half] plays,” Gartman said. “We kept playing in the second half.”

They primarily ran the buck sweep with senior Kannon Key, who finished with 87 of the team’s 101 rushing yards and one of the two scores.

“Kannon has been a big part of our offense both this year and last year,” Gartman said about his senior half back. “I think he’s got a great feel for that play [the buck sweep], and it’s tough to stop him if we give him some room to run.”

Minor injuries continue to force key players to miss practice time for the 2-2 Wildcats, and that trend is continuing this week, as senior lineman Andre Mills is dealing with a foot injury.

Both Gartman and Mills said they expect the senior to dress out and play his normal role on Friday night.

The Wildcats now turn their attention to Lee-Scott.

The Wildcats are 19-17 all-time against the Warriors, who have played the hardest AISA schedule to this point, facing Chambers (No. 2), Glenwood (No. 1), Pike Liberal (No. 4) and Macon-East (No. 8) this season.

“Lee-Scott is 0-4 but they have played some of the best teams in the AISA,” Gartman said. “I think 90 percent of the AISA would also be 0-4 with their schedule. They’ve played some very tough teams. They do some good things.”

Defensively, the Wildcats will need to slow down the Warriors’ quarterback if they hope to succeed.

“He’s a good runner, and they’ve started to use him more and more,” Gartman said. “We’re going to need to contain him.”

For the most part, the Warriors have pretty balanced offense, but with a running quarterback, they have an extra wrinkle in their offense. Luckily for the Wildcats, they have seen that wrinkle most of the season, facing teams like Chambers Academy and Banks Academy.

Kickoff is scheduled for 8 p.m. EST at Lee-Scott.