Valley faces off against Carver in first regional game 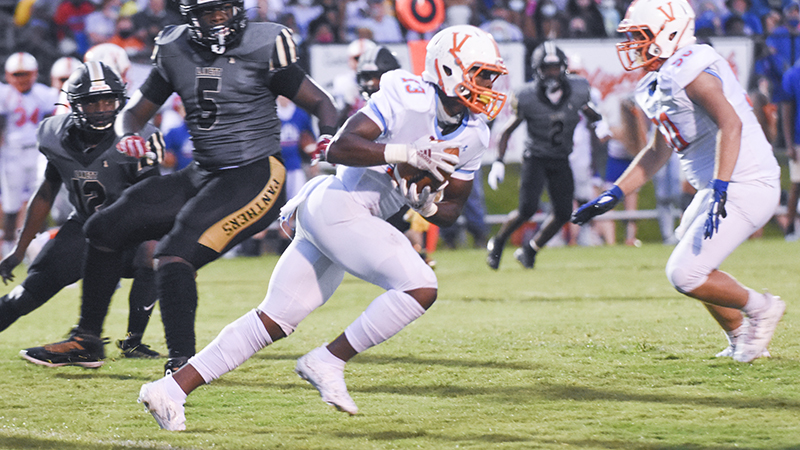 When Valley takes the field on Friday, the Rams enter 2-0 for the first time since 2014. Just like that 2014 season, the Rams went into Morgan Washburn Stadium and picked up a win, while winning the second game of the season in overtime.

Just like in 2014, the third game of the season is a region game, but unlike 2014, the Rams have made a jump in classification and will begin their gauntlet of a regional schedule.

The first team is Carver Montgomery.

Even with the loss, the Wolverines are still a dangerous 6A team.

“They’re going to be aggressive,” Valley head coach Adam Hunter said. “They’re really big up front on both sides of the football. They have a quarterback that’s shifty and can throw it well. They have two running backs that run the ball very well, so we’ll have to play very well on defense.”

The Rams calling card through the first two weeks of the seasons has been their defense. In week one, the first team defense shut down Beauregard the entire game and gave the Hornets constant pressure. Against Lanett, the Rams forced numerous turnovers and were able to nearly halt an explosive Lanett offense.

“The defense did really good,” Hunter said of the Rams defense against Lanett. “They had that one long pass they scored on, but other than that, they played really well. We’re excited about the defense.”

The Rams offense has relied heavily on running back Josh Heath, but the senior has dominated through the first two weeks, running for nearly 300 yards and five touchdowns on the season.

“Hopefully, we don’t have to beat and bang on him 35 times this week,” Hunter said. “Josh is a tough kid. He wants to carry the football, so we’re going to give it to him.”

Hunter mentioned that senior Tino Linson is healthy after being knocked out of the Lanett game in the first quarter. Linson starts at middle linebacker, but also plays on offense, giving Heath a breather at running back. He will also play some quarterback in a wildcat formation.

For Valley to be successful on offense, Hunter believes the Rams are going to have to get in a rhythm early.

“We have to establish the run and build off that,” Hunter said. “We’ve got to get a good start from the beginning and some positive things happen on first down.”

The Rams host Carver for the first time in program history on Friday. It will also be the Rams senior night.

Valley has 15 seniors on its 2020 team. Hunter’s biggest takeaway from those 15 players is their leadership.

“It’s not necessarily that they’re talking. It’s just how they act,” Hunter said. “The kids see it and they follow their lead. They don’t have to say a whole lot, because these kids see them doing the right things and they jump on board and follow them. All those seniors come together and show these younger players how to play and that means a lot to this team.”

Senior night starts at 7:30 EST, while kickoff is scheduled for 8 p.m.