Valley falls to Carver for first loss of season 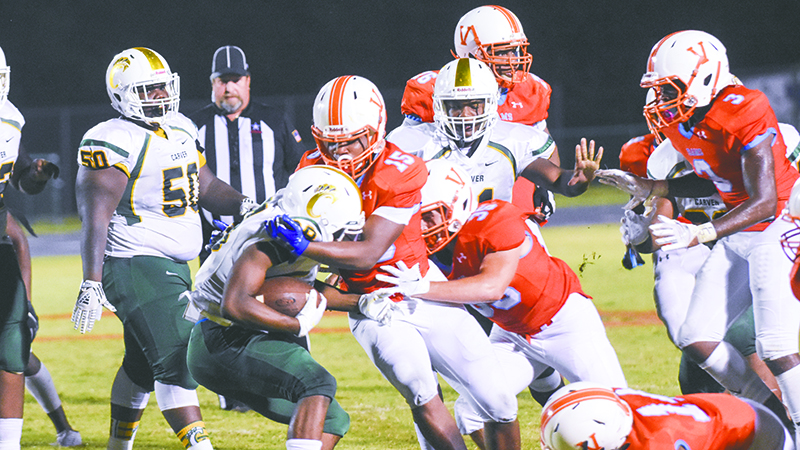 VALLEY — The Valley Rams stood toe to toe with a very good 6A team Friday night at Ram Stadium but in the end Carver had too many big plays for the Rams to win in their traditional smash-mouth style. Carver defeated Valley 34-22.

The Rams had another work horse game from running back Josh Heath, quarterback Will Kennedy had a solid game with two touchdown passes and a touchdown run, and Quez Trammel had two brilliant plays, a leaping catch for a touchdown and a long kickoff return to set up another score.

“Overall, I thought we played well, but we made too many mistakes to beat a good 6A football team,” said Valley Coach Adam Hunter. “We had some missed tackles allowing them to have some big plays. We made three big mistakes with our special teams, and you just can’t do that and win.”

Hunter was pleased with another strong game from Heath, who continues to run the ball hard. He’s also pleased to see the continuing improvement in quarterback Will Kennedy’s game.

“He’s continuing to show his leadership skills,” he said. “He made some big plays for us, but he needs to be more consistent. He missed Quez Trammell on a pass down the sideline that could have been big for us.”

After a scoreless first quarter, the visiting Wolverines broke on top on the first play of the second quarter. Quarterback Marquavious Moore found wide receiver Ke’darius Cobb open down the middle on a 32-yard pass play to start the scoring. Carl Hopkins’ PAT gave the visitors a 7-0 lead with 11:53 left in the half.

Valley bounced back to score on a 65-yard drive to answer. The drive was highlighted by the running of Heath but the big play was a 31-yard scoring strike from Kennedy to Trammell on a fourth-an-14 play. Trammell used his height and jumping ability to get to the ball over a shorter defender. That made it 7-6 with 7:37 left before halftime, and the Rams took an 8-7 lead on the conversion with a big of trickery. Instead of kicking the ball, Quinn Vega ran it around right end and made it untouched to the end zone.

It took Carver just one play to reclaim the lead. Juwon Gaston fielded the kickoff on his 18 and ran right up the middle 82 yards to put the Wolverines back in front. Hopkins’ PAT made it 14-8 in favor of the visitors with 7:22 showing in the second quarter.

After stopping the Rams on their next possession, Carver went 72 yards to forge ahead 21-8 with 2:53 left in the half. Moore connected with Ali McMillan on an 8-yard scoring play just inside the pylon in the south end zone.

Showing no quit, the Rams had a long drive before the half, but it came up short when Carver’s Carl Hopkins intercepted a pass in the end zone in the half’s final seconds.

Stadium announcer Charles Story announced that all the hot dogs, hamburgers and pizza had been sold out before the halftime break, a testament to a large crowd that was on hand. They were spread out in social distance fashion with families clustered in the larger groups.

Valley made things interesting by scoring on their first possession in the second half to cut Carver’s lead to 21-15. Runs by Heath accounted for most of the yardage and got the scoring play on a 19-yard pass down the middle from Kennedy. After an exchange of possessions, Carver went back up 28-15 on another TD pass from Moore, this time to Cobb. With 2:33 left in the third quarter, Carver was back up by 13 points. Valley had a great chance to come within one score after making a big play on defense. On a third down play, blitzing linebacker Ryan Valencia sacked the Carter quarterback for a big loss forcing them to punt out of the end zone. The Rams would have started in great field position inside the Wolverine 35, but they fumbled the punt back to Carver.

The Wolverines couldn’t move it from there, but when they punted back to Valley the Rams had to start from deep on their end of the field.

Valley was still within 13 with less than three minutes left, but a disastrous play on offense slammed the door shut. A mishandled handoff left the ball on the ground and Carver’s Carl Ligon picked it up and raced 32 years to the end zone. That made it 34-15 with 2:32 left.

The Rams showed some heart by putting one more score on the board. Trammell ran the ensuing kickoff up the middle all the way to the Carver 11.

The Rams got one more score when Will Kennedy willed the ball across the goal line. On the play, it looked like he was going to be stopped for a loss back to the seven-yard line, but he managed to break away from Wolverine defenders and fight his way toward the goal line.

He dove into the end zone just inside the north end zone pylon to give Valley one final score. The PAT made it 34-22. The Rams then attempted an onside kick, but Carver recovered and managed to run out the clock, taking home a hard-earned win in very tough 6A Region 2.

The loss dropped Valley to 2-1 on the season, but they will likely be 3-1 if Russell County forfeits next Friday’s game as expected. Their program has been hard hit by COVID-19.