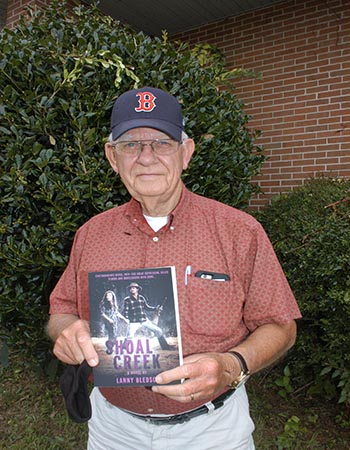 VALLEY — Valley native Lanny Bledsoe has written a novel about the hard times of the Depression and a young man’s coming of age under the cruelest and most deprived of circumstances. It’s called “Shoal Creek” and is currently available on Amazon.

He said he’s received lots of positive reviews about it.

“People I don’t know from places like California and Iowa have contacted me and told me they liked it,” he said. “Writing a novel is something I never thought much about. It’s something I did while locked up in the house for six months with COVID-19 being everywhere.”

It’s often been said that people from the rural South could deal with the hard times of the Depression better than most people in the U.S. Economic deprivation was not a new thing to them. It was something they’d always known.

Such was the case with the sharecropper Doe family of south Georgia. The oldest son, whose name was Rep, was 15 when he decided to head out on his own. The extreme poverty and the hopelessness of seeing no end to it was bad enough, but the many beatings he had received at the hands of his drunken father was more than he could take. One rainy night after his dad had passed out drunk and the rest of the family was asleep, he gathered his few belongings and a piece of salt pork and headed out on his own.

By the next day, he was miles away and free for the first time in his life. Rep would find odd jobs on his journey north. At times, he would sleep in abandoned barns or in the woods, living off fish and squirrels. At farms along the way, he would work hard for a place to stay and food to eat. He received no pay until he found work with a logging crew. He became a man before his time and learned to live by his wits and not back down from anyone.

Rep wanders for four years, crosses the Flint River and journeys northwest to the Chattahoochee River Valley. As winter approaches, he finds work on a large farm on Shoal Creek. It’s owned by a man named Red Hogan. In addition to farming, he and his sons are involved in making illegal liquor in a big way. Some of their best customers live across the river in Alabama in a small village called River Bluff.

Tangling with the Hogans was trouble enough, but Rep’s biggest trouble would come from the daughter, a good-looking blonde named Lila, who did not know the meaning of “No.”

The novel is a work of fiction, but Shoal Creek does sound a lot like Flat Shoals Creek and River Bluff sounds like River View.

Bledsoe said the characters in the book, particularly Rep, are a compilation of people he knew growing up in River View. There’s a constable in River Bluff that’s based on three different constables he knew while growing up.

“Each one of them would sit on the bench in the middle of town and keep track of everything that was going on,” he said.

The book includes a murder mystery that’s based on an actual event that took place on the Georgia side of the river in 1915.

“Shoal Creek” introduces its murder by having a man named John Watt crossing the river in a bateau from River Bluff to the Georgia side. He’s on a hunting trip but finds more than he bargained for.

Bledsoe said he had grown up hearing lots of stories told by the older men in River View. One of the more striking ones was of three men from in and around River View crossing the river in a bateau and going up Flat Shoals Creek. Like everyone else who made their way to that big farm, they wanted to buy some home-made whiskey. They were missing for a few days before their bodies were found washed up in the river with ropes tied around their necks.

Though there were some pretty obvious suspects, no one was ever charged with the killings. Some 105 years later it remains an unsolved crime. It has been written about over the years in The Atlanta Journal-Constitution but by this time it’s certain that no one will ever know what happened. Anyone who might have known anything is long since gone. Some of those men who were killed had relatives that became pretty well known in River View.

“The book’s been out for five weeks now,” Bledsoe said. “There’s a total of 27 reviews on it, and all of them have good things to say about the book.”

To get a copy, go to Amazon.com, look under books and search for “Shoal Creek.”