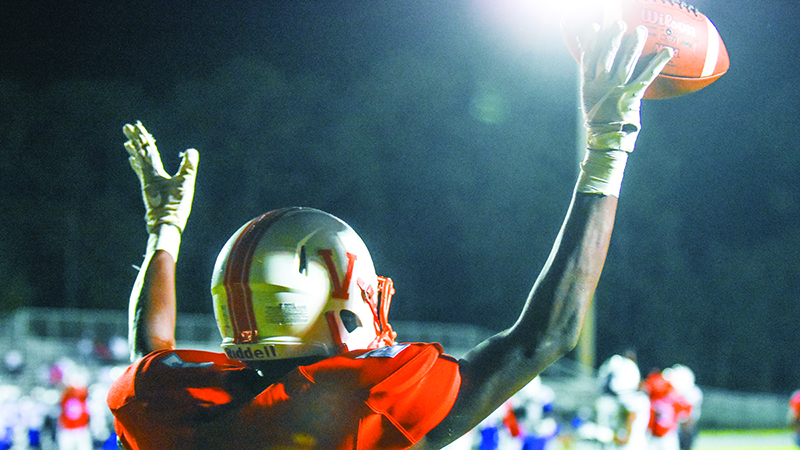 The victory gave Valley (3-1) its first region win of the year.

“It was one of those hard-fought games,” said Valley coach Adam Hunter. “My hats off to Sidney Lanier. They really got after us. And our defense played well… at halftime they had 56 yards of total offense. That’s huge for our defense.”

Tramell’s touchdown came on a key fourth and eight midway through the second quarter.  Quarterback Will Kennedy threw a high pass in the corner of the end zone and Trammell used his leaping ability to catch the ball at its highest point, putting the Rams up 7-0.

“Quez, that joker can jump out of here,” Hunter said. “The sky in the limit for that kid. We put it on his shoulders and he rose up and caught the ball twice and made some great catches. Will put the ball in the place where he needed to.”

That touchdown put the Rams up for good, though it almost didn’t go that way.

Sidney Lanier’s Jamarcus Hamilton ran the ensuing kickoff back for a touchdown, but a penalty on the extra point forced the Poets to go for two. The two-point play was an incomplete pass by quarterback Braylon Jones.

Valley answered back, as Kennedy’s pass to Randall Brooks moved the Rams across the 50.

However, the drive stalled, and Valley was forced to go for it again on fourth-and-two at the Sidney Lanier 22.

On the ensuing play, Josh Heath ran right and broke through the line for a 22-yard score to put the Rams up 14-6.

During the second half, Clark intercepted two passes to help the Rams put the game away. The first came at the Valley 44 with 8:12 left, giving the Rams a chance to make it a two-score game. Instead, Valley was forced to punt with 5:28 left, and a return by Anthony Shackelford to the Valley 42 gave Sidney Lanier new life.

The Poets reached the Valley 33 with 2:53 left, but Clark intercepted Cordez Arrington’s pass in the end zone.

Valley went right down the field, with horse collar and sideline penalties on Sidney Lanier assisting the drive. Eventually, Dalton Dunn scored on a short touchdown rush with 1:17 left to put Valley up 21-6.

The kickoff after the touchdown took a weird hop, bouncing inches from the sideline. Instead of going out of bounds, it bounced straight up into the air and Trammell grabbed it to completely ice the game for the Rams.

The ending kickoff might’ve been fitting considering the way the game started. Sidney Lanier kicked what amounted to an onside kick and recovered it, though it was unclear if the ball actually traveled the required 10 yards. The officials ruled the ball went 10 yards and then bounced backward and awarded Sidney Lanier the ball.

Valley held, forcing a punt — which became a trend throughout the first half.

Before Kennedy and Trammell could put the Rams on the board, Kennedy had a pass deflected deep in Sidney Lanier terrority in the first half. The pass was intercepted by Sidney Lanier’s Jawan Mcbride.

The Rams also missed a short field goal early in the fourth quarter that would’ve made it an 11-point game.

However, after all of these misfortunes, the Valley defense held. Hunter was proud of his team’s resiliency, which he feels started in a comeback win over rival Lanett to start the year.

“We came back and won that game in overtime, so that game helped build stuff for later on down the road and building resiliency,” Hunter said.

Valley has a bye week next week.