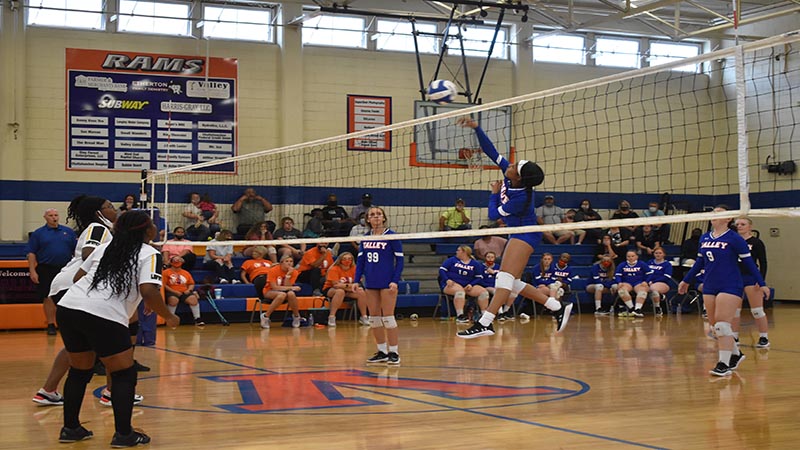 The Valley Rams volleyball team started out hot and rode the momentum from a lopsided first set for their first win of the season, sweeping LaFayettte in straight sets.

“These girls have been working so hard. I almost cried,” Rams head coach Madyson Brown said. “I’m almost speechless right now because we don’t go in prepared to win. We just don’t know what’s going to happen. A lot of these girls are new to the program. A lot have never played before, so we’re trying to adapt to the whole game. It meant a lot to us.”

In the first set, the Rams took the first point of the game, taking the serve away from the visiting Bulldogs. The first Ram up to serve was sophomore Darcee Wright.

Wright peppered the Bulldogs backline, hitting her spots. The sophomore scored the next four points without the Bulldogs returning the serve, forcing the Bulldogs to take an early timeout.

After the timeout, Wright continued her strong serving, scoring nine-consecutive points off serves before the Bulldogs scored.

Lizzie McManus followed Wright’s lead one point later, helping to build the Rams’ lead and confidence. She held onto the serve until the score was 20-2.

The second set was much closer, as the Bulldogs made adjustments.

They took the first point of the set and followed up with an ace by Akyra Mackey. With Mackey serving, the Bulldogs went ahead 4-0.

From that point, the Rams went on a scoring run, outscoring the Bulldogs 9-2 during the run. The rest of the set was a battle and had some of the best play of the entire match. Neither team was able to build a large lead, with the largest lead the rest of the set being just three points. Tied at 16, Valley had three consecutive aces to build a lead that seemed like it would last, but the Bulldogs battled back, tying the set at 19 apiece and forcing Valley to take a timeout.

The Bulldogs continued their hot play out of the timeout, taking a 24-22 lead, but the Rams wouldn’t let the set pass them by.

Senior Jerretha Gunsby took over the serve for the Rams trailing 24-22. She closed out the set with three straight aces.

The second set loss was a backbreaker for the Bulldogs as they were unable to capture that momentum they had in the second set.

Valley took the first lead of the game and jumped ahead by four points. After the Bulldogs cut the Rams’ lead in half, Valley went back to work, outscoring LaFayette 6-1 in the next seven points. The Rams dominated the rest of the set, jumping ahead 20-8 at one point. They finished with a 25-10 win to seal the sweep.

Valley is home against Beulah on Wednesday, while LaFayette travels to Randolph County for their match on Tuesday.