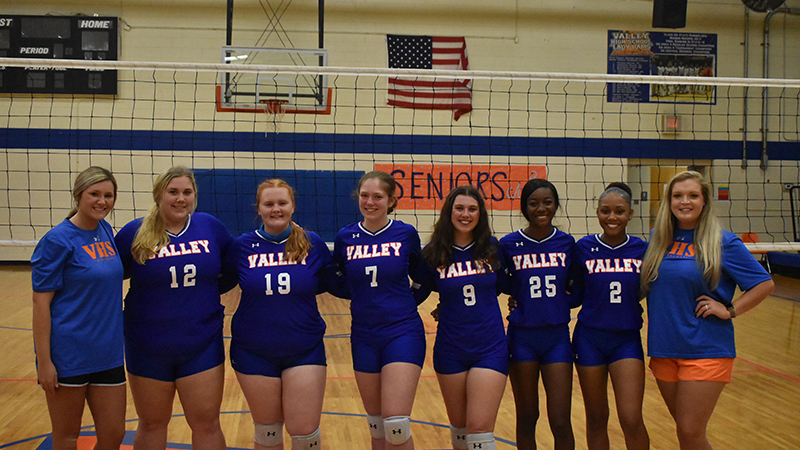 The Valley Rams celebrated their senior volleyball players on Thursday night, but the Eufaula Tigers spoiled the celebration, sweeping the Rams on Thursday.

“It was very competitive. The last time that we played against them, we were neck-and-neck with them,” head coach Madyson Brown said. “We just can’t seem to pull it out, but we’re getting better every day. I’m just ready to get some of those region wins.”

Eufaula dominated the first set of the match the entire way. The Tigers took their lead on the first point of the set and continued to build on it throughout the set.

The Tigers took the first eight points of the set, forcing Brown to call her timeout.

In the previous two matches this week,  the timeout has helped calm down the Rams and allowed them to come out strong after the minute break, but that was not the case during the first set.

The Tigers scored nine of the first 10 points of the set. The eight-point lead reached as many as 16, as the Tigers easily won the set 25-9.

Brown made an adjustment to her squad that proved to help the Rams throughout the rest of the match.

“I started a few different girls,” Brown said. “I used a better rotation, and one of our better girls has been out for a couple of weeks, and we just got her back tonight. Having her back, really put another threat for our team, so I was happy to have her back.”

The Rams came into the second set hot, scoring the first three points. They built their lead up to five, reaching a 7-2 score, forcing Eufaula to take a timeout.

The Tigers came out of the timeout focused, creating a comeback. They erased the five-point Ram lead, tying the set at 10 apiece.

At 11-11, the Tigers started to pull away. They scored seven of the next nine points, forcing Valley to take a timeout down  18-13.

The third set was a tough fought set. Eufaula took a commanding 10-3 lead and looked like it was going to run away with the set,  but the Rams fought back, dwindling the deficit from seven, down to one at 15-14.

The Rams would make the set a one-point margin later in the set but couldn’t completely dig their way out of the deficit.

Brown, who is nearing the end of her first year as head coach, was extremely proud of her senior class and the job they have done this season.

“Most of my seniors have been here for three or four years,” Brown said. “They’re very competitive. They’re very encouraging. They really are leaders and the girls look up to them. I love having every day with them and I’m going to miss them when they’re gone.”

The Rams are scheduled to play Beulah on Wednesday, a rematch of this past Wednesday’s match.