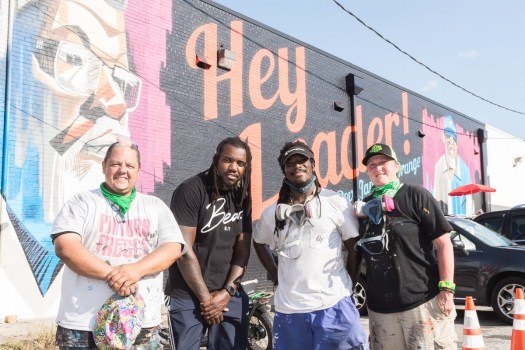 The four artist that created the mural of Rev. James E. Orange pose in front of the finished product. From LtoR are Keif Schleifer, Thomas Higgins, George F. Baker III and Golden 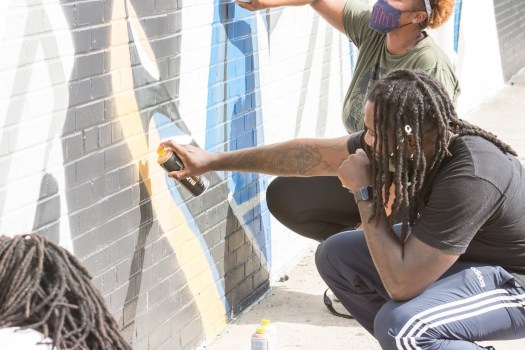 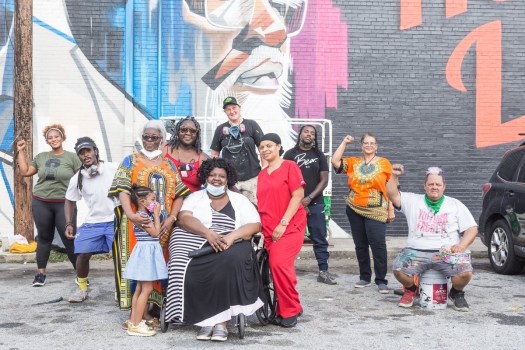 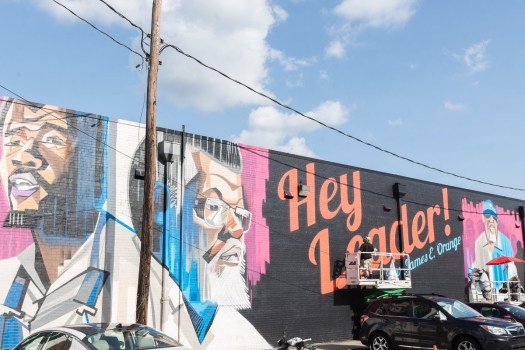 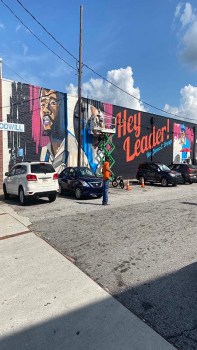 West Point native and Troup High School graduate Thomas Higgins, who goes by TOM davii, has made a name for himself in the world of fine arts, so much so that he was asked to be part of a mural that was constructed on the Goodwill building at 888 Ralph D Abernathy Blvd in Atlanta.

Orange was born in Birmingham and moved to Atlanta in the 1960s. Orange joined the civil rights marches led by Dr. Martin Luther King Jr. and the Rev. Ralph David Abernathy in 1963. In 1965, Orange organized a voter registration drive in southwest Alabama, where he was arrested in Perry County on charges of disorderly conduct and contributing to the delinquency of a minor.

In a 2007 interview with the Clarion-Ledger of Jackson, Mississippi Orange said, “rumors had gotten out that I was supposed to be lynched in jail.” On Feb. 18, 1965, residents of Marion gathered to protest and pray for Orange’s well-being. It was during this protest that Alabama state troopers shot and killed Jimmie Lee Jackson. This ultimately led to the march from Selma to Montgomery, also known as “Bloody Sunday.” Orange was at the Lorraine Motel speaking with King on the balcony above when King was shot on April 4, 1968. Orange died in 2008 at the age of 65.

The project funded by non-profit Georgia Stand Up is a way to honor one of the many civil rights leaders in the United States.

From a young age, Higgins knew he had a talent and he used that talent to his advantage.

“I was always switching schools, from West Point Elementary to Long Cane Elementary and going back and forth to Atlanta. I was always the new kid so, my way to communicate because I was so shy was to draw pictures that I know that kids knew about,” Higgins said.

Drawing taught Higgins how to create pieces of art that communicate and he learned how to use colors to bring those conversations to life and helped him connect with people.

Higgins said he started taking his art seriously in middle school and credits his teacher at Long Cane Middle School, Elena Thomas, for molding him and entering him in art shows in seventh grade. His work was noticed by Rena Weatherington, a teacher at Troup High School teacher, who Higgins says waited on him to get to her class.

“She is the one that put me in AP and helped me get a scholarship to The Savannah College of Art and Design,” Higgins said.

“I had to start from somewhere just to get my name out in Atlanta,” Higgins said. “I personally hit every show that I could and every event I could until people knew who my name was until I was getting real looks from professional galleries.”

The networking finally led to his first solo art show in 2015.

In 2019, Higgins said he began doing more design work and partnered with the Atlanta Braves and Xfinity Cable to design and hand out free t-shirts and nearly had the chance to work with the Atlanta Hawks, but COVID-19 canceled the remainder of the Hawks season.

Higgins’ artwork can even be found on a beer can. Orpheus Brewing in Atlanta used his work on their fifth-anniversary glass as well as a Strawberry Berliner Weisse beer called Circularity.

“She [Schleifer] was like, I don’t want to remember him, I want you to feel his heartbeat on the wall,” Higgins said.

Schleifer told Higgins she recruited him to draw the portrait because that is how he connects with people.

For his part of the mural, Higgins spent three days creating the colors and bringing the portrait to life.

“I am just humbled to help,” Higgins said.

The other three artists have been working since Monday on the painting portion of the mural that was set to be completed on Friday.