Wrapping up busy season on lake 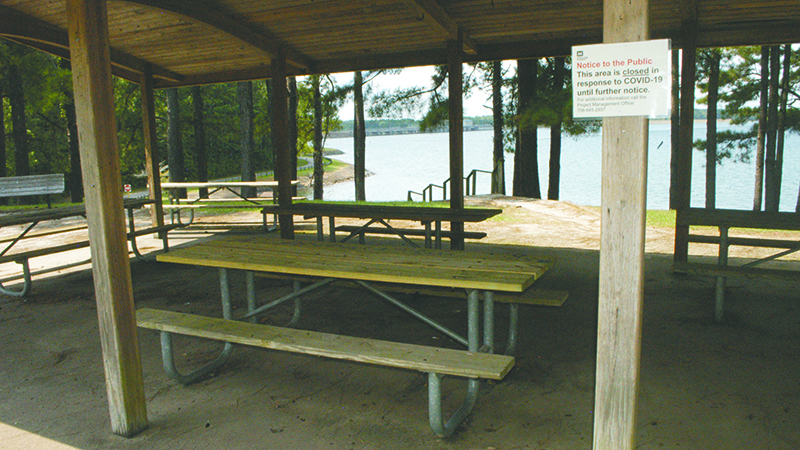 Group picnic shelters like the one above have been closed this year on West Point Lake. The one above is located at Eagle’s View on the east side of the lake near West Point Dam. --Wayne Clark

WEST POINT — The year 2020 has been a year like no other on West Point Lake. There was a shutdown period due to COVID-19, followed by a reopening plan. Many events that had taken place for years on West Point Lake were canceled. There was no WOW! Picnic for students at Rocky Point Park, and no FOP Easter egg hunt at Rocky Point. Coming events that have been canceled include the annual Public Lands Day in September and the Special Day for Special People in October.

In spite of that, it was a really good summer in terms of camping, being out on the lake and simply enjoying an outdoor day on a blanket in a day-use park.

“In terms of the recreation we’ve had here this year, it’s been really good,” said Ranger Supervisor David Barr. “Our four campgrounds (R. Shaefer Heard, Amity, Holiday and Whitetail Ridge) were 100 percent full for most of the summer, and there was much visitation to our day-use parks. We were having visitations from people who had never been here before. We started noticing it in March. People saw coming to West Point Lake as something they could do to get out of the house and be in the great outdoors. It was a better alternative for them than being indoors or in a crowded place. We have had a steady stream of people coming to West Point Lake, and that’s good.”

The shutdown period from mid-March to mid-May was difficult.

“Like all federal agencies, we had to come up with a reopening plan,” Barr said. “We had to close all our campgrounds on March 18. R. Shaefer Heard was the only one open at the time. All four of them had to stay closed until our reopening plan was approved.”

The reopening was based on seeing a local decline in COVID cases for 15 days in a row. The shutdown period lasted from March 18 until May 22. Reopening meant that a total of 54 bathrooms and shower houses had to be cleaned every day by the West Point Project’s contractor, East Operations & Maintenance. The total number is well over 60, but this was reduced to 54 by closing some loops at Veasey Creek, Long Cane, Glass Bridge and Sunny Point day-use parks. In late June, the Long Cane loop was reopened due to a large amount of use in the open portion of the park.

“We were seeing lots of visitation during the shutdown,” Barr said. “People were getting out of the house and going to the day-use parks that were still open. The shutdown brought exposure to West Point Lake. We now have some people coming to the lake who weren’t before, and we want them to keep coming back and enjoying the experience. Veasey Creek Park is a classic example. We have had a lot of people going there this summer, even though part of the park has been closed.”

Effective Tuesday, the campgrounds at Amity and Holiday parks were closed for the season. The 58 camp sites at Whitetail Ridge will remain open through Nov. 29.

Fifty-four of Shaefer Heard Park’s 117 camping sites remain open year-round. Numbers 55 through 117 are closed until next spring. A total of 22 day-use parks will remain open.

The boat ramp and pier at Rocky Point will open on Thursday, Sept. 10 and remain open the remainder of the year. The pier at West Point Dam will reopen as well. In most places where there are more than one bathroom, only one will remain open. The one exception is R. Shaefer Heard Day Use Area, where one bathroom will stay open near the bike trail’s trailhead and another will stay open near the boat ramp.

Barr said he was surprised to see the crowds at the lake during the shutdown period.

“At first, I was surprised to see so many people out,” Barr said. “I saw the same thing at Roosevelt State Park on a visit to Pine Mountain. What was happening was that people were getting away from home and crowded places to enjoy the great outdoors.”

The large number of people camping and at the day-use areas was a good thing; the cancellation of some long-held events was the bad thing.

“This would have been the 42nd year we had Special Day,” Barr said.

“We usually have over 1,000 people there. With many of them being elderly, with a disability or having health concerns we thought it best not to have it this year. Many of those who have come in the past couldn’t leave their nursing home anyway. It’s sad for us not to continue it. We would have had it in October for the 42nd time. Hopefully, we can do it again next year in October.”

One of the main activities with Public Lands Day was a litter pickup along the shoreline. Barr said he welcomes volunteer groups to do this.

Trash bags will be donated at the Project Office for any group that wants to participate.

Another factor in having had a good summer on the lake is that there’s been more than enough rainfall to keep the lake full.

“It’s good for recreation when we have a full lake in the summer,” Barr said.