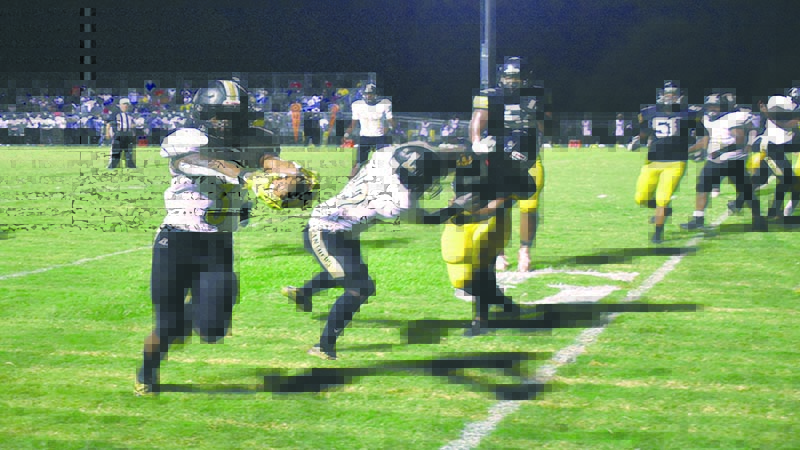 Just a few plays into the second quarter of Friday’s game against LaFayette, the Lanett Panthers were lined up in a punt return formation.

The Bulldogs boomed a punt, down to the Panthers’ nine-yard line, where No. 3 was waiting for the ball. Senior Kadarius Zackery went left, made one move and was gone, putting Lanett up two scores and turning the momentum their way.

Zackery’s day wasn’t done after the punt return, as he ended both of the Bulldogs’ second-half drives with an interception. He also iced the game with a 32-yard touchdown run.

“I’ve been telling him that he’s going to have a breakout game, but for some reason the first few games he’s just been holding back,” Lanett head coach Clifford Story said after Friday’s win. “He’s just a different makeup. He’s a game-changer.”

Story echoed himself on Tuesday when asked about Zackery saying that he is one of the best players on the 2020 Panthers roster.

“He’s always had that ability. Even last year, in big games, he would rise to the occasion,” Story said. “He’s an under the lights guy. Most kids shy away from the lights, but K-Zack doesn’t do that. Moving forward, I think he has his mindset on dominating every Friday.”

Zackery is a game-changer in all three phases of the game.

As a junior, he was named to the 1A First Team All-State as a defensive back, which was his primary role for most of the season. About halfway through the Panthers’ championship season, Zackery added to his game by joining the punt return team.

He dominated with his speed and vision as a return man. Story brought up the Sweet Water game last season. In the 1A semifinal game, the Panthers gave up the lead early in the fourth quarter. Zackery answering by running left, making a cut and taking a punt 73 yards for a touchdown.

Now a senior, Zackery has made several adjustments to his game. Now, he plays on offense, playing at receiver and mixing in as a quarterback.

He has also transitioned from a cornerback, where he would play in man-to-man coverage on almost every play to a safety that has to fly around the field.

“It’s been good because I get to play offense more this year. Plus I’ve changed positions, so it’s been easier because I’m versatile in everything I play,” Zackery said. “I love playing quarterback. It’s new to me because I’ve never played it before.”

Adding to several different areas of his game isn’t something that has challenged Zackery too much, he said.

Like the 2020 Panthers, Zackery started out of the gate slower than he expected, but now heading into week six, Zackery and Lanett are getting on a roll.

“The first few games, I really wasn’t playing to my potential, so the coaches were telling me I have to lock in and play like I played last year,” Zackery said. “[Last] Friday, I just locked in. I was just like ‘I’m going to be a dog and just go crazy.’”

Zackery wears No. 3 on the field. Every time Zackery has scored a touchdown, he lifts three fingers in the air while looking up to the sky.

Three is a special number for the Panthers, especially this season because Quae Houston wore it in 2019. Houston died suddenly this summer.

“It means a lot to me because he was one of my close friends,” Zackery said. “Every time I wear No. 3, it’ll be on Friday. I want to turn up for him.”

Zackery and the Panthers have one of the biggest games left on their schedule on Friday, as they host the Handley Tigers.

The Panthers have won the last three matchups, all of which have been a big measuring stick for Lanett heading into the second half of their season.