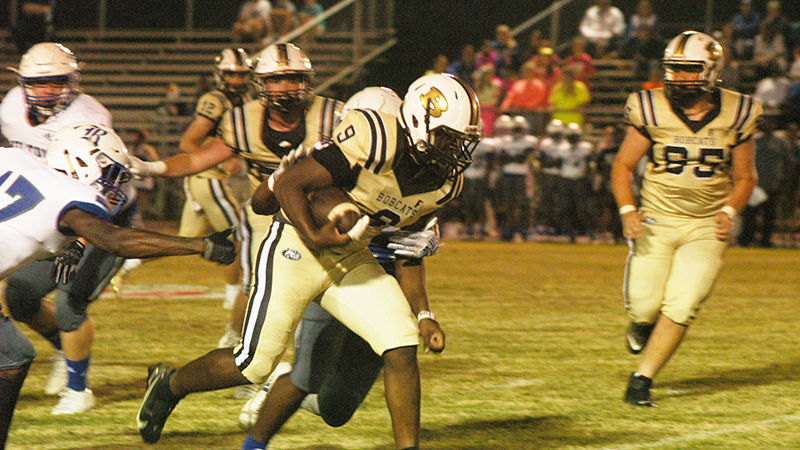 BEULAH  — What’s been a very disappointing season for the Beulah Bobcats stayed that way Thursday as the visiting Reeltown Rebels took a 47-13 win on homecoming night at Bobcat Stadium.

The team’s first three games were postponed due to COVID-19 and the team has since gone 0-4 against a very difficult schedule.

Beulah did get good performances from senior quarterback Kaleb Abney, who ran and passed the ball for close to 160 yards, finishing with 71 rushing yards and 68 passing yards, and freshman running back Jacori Tarver, who ran the ball 16 times for 115 yards. Each had a rushing touchdown.

The leading tacklers were sophomore linebacker Caleb Burton with eight, senior linebacker Owen Kelley with six and defensive backs T.J. Washington and Abney with six each.

After the Rebels scored on their opening possession, Beulah responded with a 65-yard drive to tie the score at six. A 24-yard run by Abney around left end with 6:35 left in the opening period had the game tied with each team having one score.

It wouldn’t stay that way for long. Reeltown went ahead for good on a long touchdown run right up the middle by running back Juicy Huguley. The point-after kick made it 13-6 with 4:01 left in the period.

The real backbreaker for Beulah took place on the first play from scrimmage after the kickoff. A miscue on a handoff play left the ball on the ground. An alert Reeltown player scooped it up and raced 30 yards for a score. That made it 19-6 at the 3:48 mark of the quarter, and Beulah’s hopes were fading fast.

The Bobcats did move the ball to midfield on their next possession but turned it over to the visitors when a fourth-down play failed to pick up the first down. On the play, Abney went through the motions of a punt but then passed it down the field in the direction of Owen Kelley, who was open near the 20-yard line. The pass fell short of the mark and Reeltown took over on their own 49. On second-and-13 from the 46, Huguley took a handoff up the middle and scored his second TD of the game on the same play he’d earlier scored on. That made it 26-6 with 32 seconds left in the first quarter.

It looked like the Bobcats would hold the Rebels without a score in the second quarter, but they let them go 80 yards in the final minute of the half after a long Beulah drive came up empty at the Reeltown 20. The Rebels scored on a 15-yard touchdown pass on the final play of the half. That made it 33-6.

Reeltown scored two more times in the second half to lead 47-6 before Beulah added a late score on a 67-yard run by Tarver to make the final 47-13.

Still winless on the season, Beulah will close out the season with a home game with Goshen next Friday and road games versus Dadeville and LaFayette on the following Fridays.