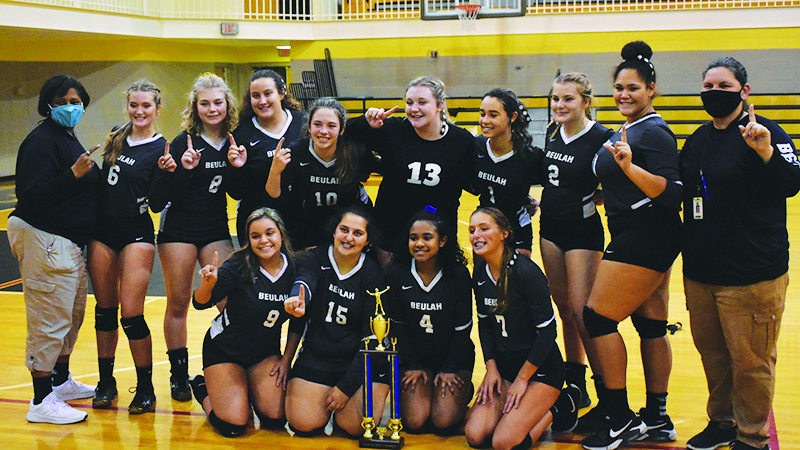 After easing through the first set of the match, Beulah volleyball stumbled during the second set but was able to regain composure and dominate the remainder of the match, defeating Dadeville 3-1 on Tuesday night. The win gave the Bobcats the area championship for the second consecutive year.

“It was kind of up and down,” head coach Allison Aikens said. “We started out the first game we were on fire. The second game not so much. The girls pulled it out, so it was kind of a roller coaster ride. I’m super proud of all these ladies. They did such a great job.”

The Bobcats jumped ahead quickly in the first set, taking the first five points leading to a Dadeville timeout.

The timeout helped the Tigers mount a small comeback, dwindling the Bobcats lead from five to just one at 9-8. The comeback was fueled by Kaniyah Wilkerson’s powerful serving. Unfortunately for the Tigers, the Bobcats were able to weather the comeback and claimed nine of the next 10 points forcing the Tigers to take their second timeout. The timeout worked to calm the Tigers down but didn’t lead to a comeback like before as the two teams were able to match the play of the other side. Beulah won the set 25-19.

The next set did not go the Bobcat’s way. The two teams traded points to lead off the match, but Dadeville was able to reach five points first, taking advantage of mental mistakes by the Bobcats. Aikens’ first timeout proved to be ineffective, so she was forced to take her second timeout with the Tigers leading 11-3.

“It wasn’t a close game in the first game, so I think we were just a little overconfident,” Aikens said. “We were just making little mental mistakes that we weren’t correct in time.”

The second timeout seemed to calm the Bobcats down, but they were never able to tie the match. The closest they got was four-points, which they reached twice, but they ended up falling 25-15 in the set.

“It was a tied ball game and it became the best of three,” Aikens said of her message to the team after the second set. “We just have to reset and get back to the basics and do what we know they can do. Mentally, they just have to know where they are.”

In the third set, Beulah came out much more locked in. They took the opening point and never let the lead slip away.

In the first 21 points of the set, it as tightly contested, as Beulah couldn’t jump too far ahead. In those first 21 points, Beulah led 12-9. Beulah built it’s biggest led from that point, taking five of the next six points. Unfortunately, the Bobcats weren’t able to keep their momentum the rest of the set, as the Tigers crept back in, contesting the game 18-16 and forcing Beulah to take a timeout.

Beulah came out of the timeout hot, scoring seven of the final eight points to win the set.

The Bobcats took the momentum from the third set and carried it into the fourth and final set.

They jumped ahead 3-1, which slowly became 12-2 and eventually became a huge 25-12 win to claim the set and match.

Junior Katie Morris was named the MVP of the tournament. She finished with six aces, five kills  and a pair of blocks in the win.

“She gives 110 percent every time,” Aikens said. “On the floor, she’s been a great leader for us. The girls really respond well to her. She’s who we look to when we do get down to help pull us up. She’s a great all-around player and a great captain.”

The Bobcats will host the runner-up of area one in the sub-regional game, which will be played sometime between Wednesday and Saturday.

“It’s’ great,” Aikens said of getting a chance to host a sub-regional game. “We play a couple of tournaments, but it’s only one court. When we go to Regionals, there are six courts going on at one time.  We have balls going everywhere and there’s a lot of noise, something that we don’t get to see in the regular season, just because we don’t have the capacity around here. It’s always exciting but new for us.  Having a subregional game at our home court, I think is going to give us an advantage.”