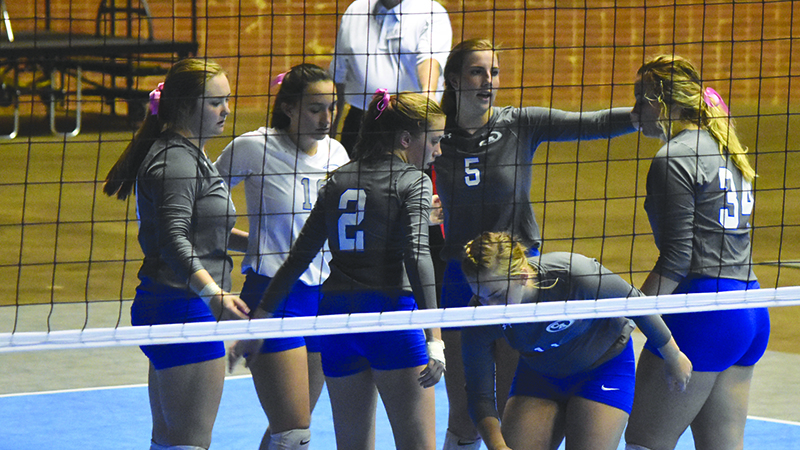 MONTGOMERY — Late in the third set, the Chambers Academy Rebels volleyball team was trailing by four points. Hooper was on set point and was trying to avoid a sweep.

Stephens scored two of the three ensuing Chambers’ points to tie the set at 24, forcing Hooper to call a timeout to hopefully cool off the Rebels and regain its composure, but the Chambers was on a roll.

Coming out of the timeout, Stephens finished off her run, scoring on a soft kill and a block, giving the Rebels a come-from-behind win in the third set, sweeping Hooper in the state semifinal game.

“It’s the little things that matter,” head coach Randy Bonds said. “You can see that the shifts would come in waves, where they’ll [the Chambers players] make a mistake, the team camaraderie will dissipate, and they’ll get it back. It’s just ups and downs that cause that, plus the other team got much better at defense so that made a big difference in the third set.”

The third set of the match was a battle the entire way.

The Colts took the first lead of the set but had lost it by the six-point mark, as the set was tied at three apiece. They were able to quickly regain their lead but they were never able to expand the lead past four points.

Every time the Rebels fell behind by four, they were able to cut into the lead, tying the match at 16-16 at one point before taking only their second lead of the match at 18-17.

Overall, Bonds thought the team’s serving was the difference between losing the set and claiming the sweep.

“It really boils down to solid serves, which we did really good today,” Bonds said. “We had excellent serving. The coverage that we work on in practice makes a huge difference. If they follow the rules that we practice, then we do really well. If they start moving and shifting around the court in their own way, that’s when things start moving.”

In the second set, The Rebels took the first lead of the set, jumping ahead 3-1, expanding that lead to 10-5 which caused Hooper to take a timeout. The Colts came out of the timeout hot, scoring the next 12 points.

From leading by five to trailing by four, the Rebels had their backs against the wall, but the Rebels were able to reset and calm down.

“Timeouts are a funny thing. There’s not that much spoke of, at least in my timeouts,” Bonds said. “It’s more of a breather, a reset, encouraging words and do your best to get back in.”

While the first two sets were a dogfight the entire way, the Rebels were able to gain momentum early in the match.

In the two matches, junior Bailey Allen had herself a day. She finished with 28 kills, 18 of which were against South Choctaw, 35 digs and six aces.

The Rebels will play for the state championship game on Thursday at 1 p.m. CT at Garrett Coliseum. They will face Edgewood.

“We’ll just go through a lot of the basics,” Bonds said of his message that he will give to the team at Wednesday’s practice. “The biggest thing is just attitude. It’s probably one of the biggest components that leads to either victory or loss. We talk a lot about that. We work on that a lot.”