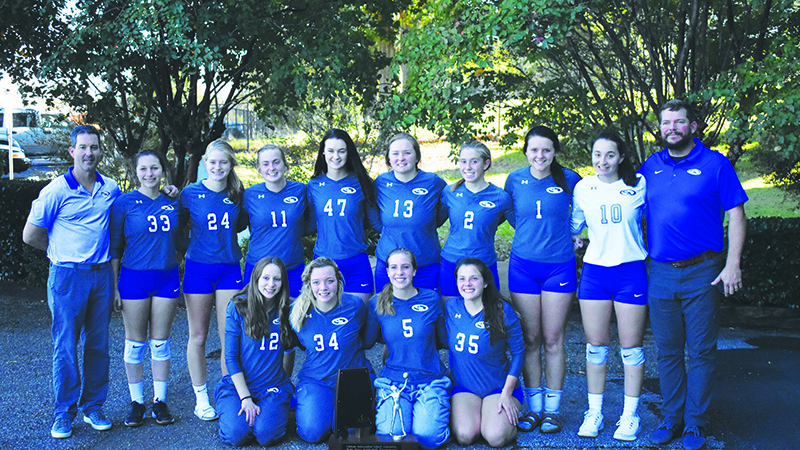 For the second year in a row, Chambers Academy volleyball was on the precipice of bringing home a state championship but came up just short. Just like 2019, the Rebels were swept in their final match of the year, losing to Edgewood, who has now won four of the last five AISA Class AA State Championships.

“We always break it out on family, and that’s really what we’re all about,” junior Bailey Allen said. “We’re all really close to each other. We all talk to each other every day, so we really are a family. We fight through everything and have gone through a bunch of crap this year, but we pushed through it. When we come to volleyball practice, that’s the highlight of our day, and it really shows when we go out there and play.”

Through the first eight points of the opening set, the two teams were tied at four apiece. Then, Edgewood turned up the pressure, scoring seven of the next nine points to jump ahead by five. The Wildcats continued their quick onslaught and capitalized on Rebel mistakes, increasing the lead from five to nine by the time head coach Randy Bonds took a timeout.

“I told the girls if they started the game and they were on, have confidence and stay aggressive. That’s the only way to win at this level,” Bonds said. “They were just a little bit off. We weren’t really playing that aggressive. We started out with bad serves and were playing more defense than offense. That’s the outcome.”

The timeout failed to give the Rebels any momentum, as Edgewood scored the final five points of the set to win 25-11. Chambers trailed the entire set outside of the 4-4 tie early in the set.

In the second set, the Rebels led off with the first point, but quickly fell behind 3-1. They were able to fight back after trailing 6-2, taking a 9-8 lead behind the excellent serving of Claire and Bailey Allen, both of which were named to the all-tournament team following the match.

The set remained close for a few points, as teams started to trade points, but the Wildcats took a 12-11 lead and never looked back, winning 25-17.

The Wildcats put even more pressure on the Rebels to start the third set, as they jumped ahead 8-3. The five-point lead grew to eight before Bonds took his first timeout of the set at 13-5. The timeout seemed to slow the Wildcats momentum a little bit, as the Rebels started to claw their way back into the match, but the Wildcats were able to keep pace with the Rebels until they took a timeout up 20-13 to let the crowd cheer their seniors. Chambers outscored the Wildcats in the final 11 points of the match, but Edgewood won the final set 25-19.

“I’m proud that we stayed in there,” Allen said. “We fought our hardest that game, and I’m proud of us for doing that. I wish it would have been a different outcome, but I’m proud of the way we fought.”

Bailey Allen finished with a team-high 12 kills in the three sets, while Britten Stephens finished with five in her final career game. Chambers had just five aces in the loss.

“I just told them that I was extremely proud of them,” Bonds said. “It’s such a wonderful group of girls. This is a lot more than just winning. It’s about developing those lifelong lessons of teamwork and camaraderie and just being able to handle stressful situations. We work on a lot of lifelong lessons that stem from this team.”