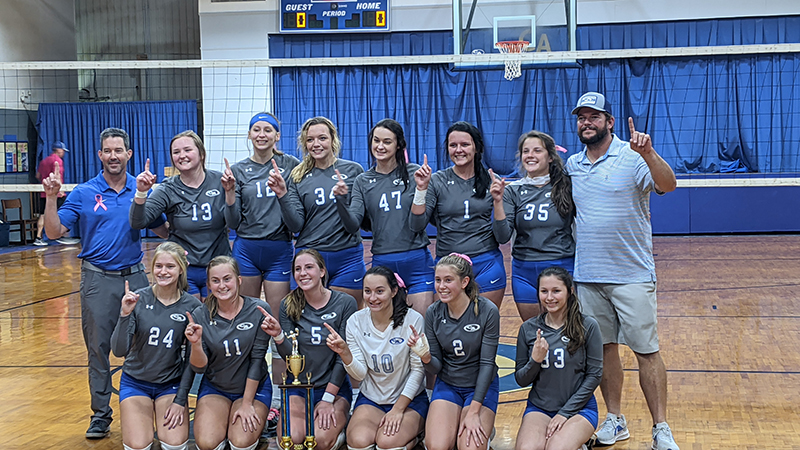 The Chambers Academy Rebels are heading to Montgomery in a familiar position — region champions. They claimed the region on Thursday in a tough four-set match against Coosa Valley.

“This whole sport has ups and downs in every single match, based on little factors between good serves, good defense and whatnot,” head coach Randy Bonds said. “It’s an emotional game. The more they control that emotion, the better we play. We talk a lot about that during the season. They did an excellent job of that today.”

Chambers started off shaky in the first set of the regional championship.

Chambers led Coosa Valley twice in the entire set, taking their first lead at 3-2 and took their final lead at 10-9. Trailing by one, Coosa Valley took its first timeout of the set. The timeout worked to rally the visiting Rebels as they came out of the timeout hot, scoring 10 of the next 16 points.

Even though Chambers had a couple of runs to make the set closer, it eventually dropped the set 25-20.

“This team actually has a tendency to start that way, so I’ve just grown used to it and patient with it, and kind of let it ride for the first set, and they’ll usually iron out those issues,” Bonds said.

The Chambers Academy Rebels came out much crisper after the end of the first set. They were better at passing and communicating in the second set.

“We work a lot on consistent passing,” Bonds said. “We walk through every single rotation, and we go through every scenario. It helps with all the basic skills of the game. What we have learned is that the very little things add up to the wins or if we don’t the losses.”

The Chambers Rebels took the first lead of the game and held on for a while, but Coosa Valley was able to mount a comeback, quickly extinguishing the four-point deficit and tying the game at 12, forcing Bonds to take a timeout.

The teams traded blows, but neither was able to build a large lead in the set. After trailing for 13 points, Chambers tied the set at 19 apiece.

From there, Chambers was able to take control of the set, winning 25-22.

Chambers carried over its momentum from the second set into the third.

Chambers scored the first two points of the set and never looked back. Its lead ballooned from two to six, where it stayed for most of the set.

Senior libero Lindsay Fuller was in control for most of the third set. She finished with three aces, but her serves kept Coosa Valley out of rhythm, allowing Chambers to control the set.

Chambers finished off Coosa Valley in the fourth set.

Chambers took the first real lead of the set at 4-2 and never let go of the lead.

At 10-8, junior Megan Ware took over the serve. Like Fuller, Ware had a couple of aces but for the most part, her serves were able to set up Chambers more than Coosa Valley.

Chambers won the final set 25-20 to claim the region championship.

Chambers will play in Montgomery in the state quarterfinals on Monday at noon CT.