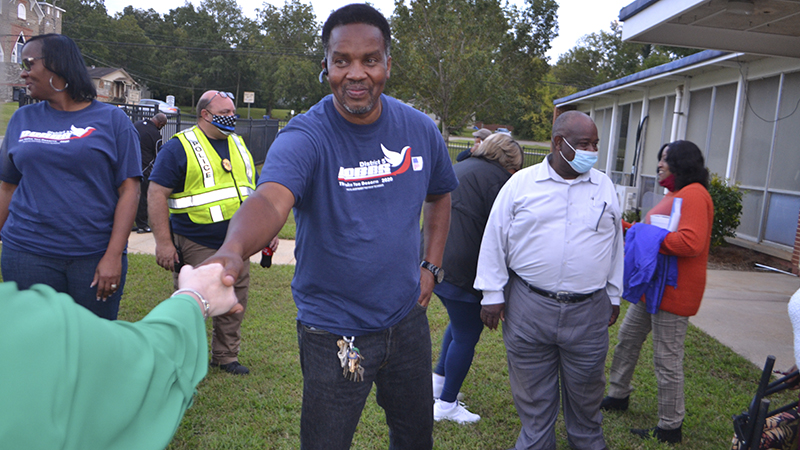 LANETT — Tifton Dobbs came up only a few votes shy of winning a three-way race for a city council seat back in August. That put him in a runoff with John Motley on Tuesday, and that forward momentum carried him to win the District 5 seat 126-67 in the unofficial results on Tuesday.

His victory will become official following canvassing at noon on Oct. 13.

Moments after the results were announced by City Clerk Deborah Gilbert, Dobbs said that it had been a long campaign, first with the initial election and then with a runoff, and that he was tired but grateful.

“I want to thank all the District 5 voters for coming out today,” he said. “I am here to serve and to help keep things moving forward. I didn’t make any promises, but I have listened to what the voters told me. I have heard complaints about high utility bills, our district not getting its fair share of road paving projects and not having the greater variety of recreation we need here in Lanett.”

Dobbs and his wife, Daphne, run a transport company in downtown Lanett. They have seven large buses to transport people to out-of-town events. Almost everyone in the Valley has seen the big Dobbs buses on Highway 29 at one time or another.

Dobbs said his experience from building a bus company from scratch should be an asset in council service. He started out in 1989 with a converted school bus and now has an impressive fleet carrying people to many different destinations.

“I want to see this city moving forward,” he said. “We should have parks where people can walk and exercise, and we need to be offering more sports along with football and basketball. We need more variety. I’d like to see us have soccer, lacrosse, baseball and softball.”

He said that the COVID pandemic had sidelined his business to a certain extent but that he’d found lots of ways to stay busy. He’s been busy lately rebuilding the sanctuary of his church. He said that he’d turned his truck into an office. He’d run two elections from it and had helped people register to vote.

“I will keep doing that through the presidential election,” he said.

He commended John Motley on having run a clean race and not getting into any personal attacks.

“I thank him on having run a positive campaign and for congratulating me when the results were in,” he said. “John comes from a great family. Like many people in Lanett, I thought the world of his mother. She took care of me, the other police officers and city employees when I worked for the city. Had he won the election, the city would have gotten an outstanding person to represent them. I thank the voters of District 5 for putting their trust in me. I want them to know that I don’t want to be the typical council representative. I want to be different in the way we can seek positive change. I will be speaking up for them.”

Dobbs had a large delegation of family members with him outside the James A. Hardy gym when the results were announced. They cheered loudly, and the candidate broke into a big smile.

Some of his six kids and four grandchildren were there to congratulate him.