Down Goes No. 1: Lanett dominates Randolph County in battle of top 5 teams 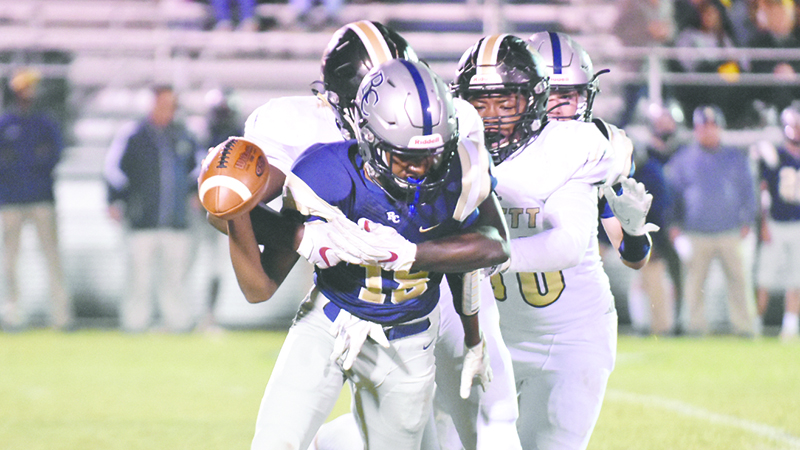 WEDOWEE– The No. 5 Lanett Panthers wanted to make a statement when they came into Ron Watters Field.

They did just that on Friday, decimating the No. 1 Randolph County Tigers 61-20.

“We played extremely well,” Lanett head coach Clifford Story said. “They were locked in all week. We had a great week of preparation. I thought we would be able to play this kind of game. Coming off last week, we had a little bit of momentum. [Thanks to the] Good Lord, we haven’t had any injuries. We just need to keep snowballing and keep moving forward.”

Along with taking down the No. 1 team in 2A, the Panthers claimed their fourth consecutive regional championship and will have the opportunity to host at least one playoff game.

“It’s overwhelming,”  Story said. “Sometimes when you’re dealing with your players, you want great things to happen for them. Capturing the regional championship had me a little nervous early on, but I started to see things change. We made a few changes in a few places that has helped us. Now, we have to move forward. We’ll have a good playoff seed. We pray that we won’t have any injuries and get ready for the playoffs.”

The onslaught started from the Panthers first drive of the game.

After struggling to move the ball the first two plays of the drive, the Panthers were looking at a third and 14 from their own 24-yard line.

Kadarius Zackery scrambled around in the pocket, stepped up and found Trey Abner, who was all alone at the 50-yard line. Abner ran untouched to the end zone for the first score of the game.

On their next drive, the Panthers drove quickly down field. They scored with about 3:30 left in the quarter when D’Quez Madden charged between the right guard and tackle for a touchdown.

Zackery, who has become a highlight factory, had one of his more exciting touchdowns on the Panthers first drive of the second quarter.

Zackery ran to his left, juked a defender and split another pair of Tigers and sprinted down the left sideline 77 yards giving the Panthers a 19-point lead early in the second quarter.

Lanett added to its lead on its ensuing possession, when Madden cut to the left, jumped over a fallen Tiger and went into the end zone for a 22-yard score.

After allowing just their second touchdown of region play, the Panthers had the ball with less than two minutes left in the opening half.

They needed just three plays to get to the end zone.

Zackery started the drive with a 29-yard run down to the Tigers’ 38. On the next play, he hit Seidrion Langston for a 28-yard pass setting up first and goal. Zackery capped off the drive with a 10-yard run, diving for the pylon and the touchdown.

The Panthers got the ball to start the second half and scored in less than two minutes, as Zackery threw his second touchdown of the game, hitting Markel Patrick on a post to the right sideline. Patrick took the ball the rest of the way for a 45-yard touchdown.

Madden scored his next two touchdowns on the next two Panthers drives. On the first one, he took the handoff, bounced to the right and sprinted 47 yards for a touchdown.

On his next score, he spun off a Tigers’ defensive lineman, made a cut, sprinted to the corner and ran 35 yards down the sideline.

Zackery scored the final touchdown of the game. He recovered an onside kick attempt at his own 27-yard line, sprinted toward his bench, beat the Tigers to the edge and jogged down the sideline untouched for a 73-yard score.

“They are our go-to guys” Story said.

“K-Zack and D’Quez can take us where we need to be. We’re going to feed them week in and week out until someone shows they can contain and top them. They’re playing good football so we’re going to keep pushing them.”

The only touchdown not scored by Zackery or Madden was a screen pass to Dai’shun Walker from KK Atkinson. Walker sprinted up the middle for a 61-yard touchdown.

Walker has had a touchdown longer than 60 yards the last three games.

Lanett is home next week for its homecoming game against Horseshoe Bend.