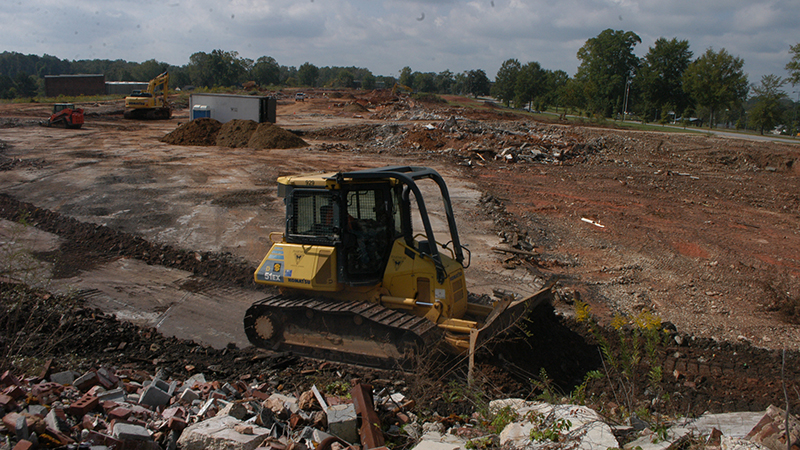 VALLEY —Anyone who hasn’t driven past the Fairfax Mill site lately might consider making that trip.

“Lots of progress has been made in cleaning up the site,” Planning and Development Director Travis Carter told the council Monday evening. “I think this site will look the best of the five mill sites that have been cleaned up so far.”

“It does look good,” said Mayor Leonard Riley. “People should drive by there to see the progress that’s been made.”

Harmon Engineering of LaFayette is the project contractor. The cleanup project is being funded by a $500,000 federal Brownfields grant. The city has a $100,000 matching share.

Long-range plans are to convert the area into green space. There’s the possibility of having walking trails on the site.

For many years, the Fairfax community was known for its village green. An East Alabama fire station is located there today, but the community could be getting a much larger village green where people can relax and enjoy being outdoors.

Over the past three weeks, a total of 4,250 tons of material has been hauled away. It was taken to the Salem landfill because minute portions of the material contained contaminants such as asbestos and arsenic. The arsenic was found in an old coal pile.

“People will see an even bigger difference over the next two weeks,” said Carter. “Our primary goal in doing this was to clean up an eyesore right across the street from churches and an elementary school. There’s a big drop-off near the Fairfax fire station. We will be doing some work there in the next few days.”

In other business at Monday’s city council meeting, a contract was awarded to Chris Clark Grading & Paving of Lanett to resurface eight city streets in the 2020-21 fiscal year. The Clark bid of just under $775,000 was considerably lower than another competitive bid.

Work at 61st Street will be delayed until some sewer line work is completed. A $200,000 grant has been approved for the East Alabama Water, Sewer and Fire Protection District to do that.

A contract in the amount of $20,700 was approved for J. Hodge Tree Service, Valley, to cut a total of 15 dead or dying trees in the city. The Hodge offer was lower than another competitive bid.

The council approved a resolution imposing a lien in the amount of $2,000 to recover its cost in cleaning up a nuisance property in the Shawmut mill village.

Council Member Jim Clark asked if the city could move on cutting down a tree near the Shawmut Mill site. He said that big pieces of the tree had been breaking off and that some of them were landing in a street. Public Works Director Patrick Bolt said he knew about the tree Clark was talking about but thought that it was on private property and not on the city right of way.

Council Member Jimmy Gilson asked the mayor if anything had been going on with Langdale Mill. Much of the site has been cleaned up but a good portion of the mill building was still there. Owners John and Thomas Bush have been talking to potential investors who may have some interest in repurposing the remaining portion.

“I checked with them a week or so ago,” Riley said. “They told me they would be cutting some high grass on the site. A company from North Carolina had been looking at the site.”

Council Members Clark and Marquetta Madden thanked Bolt and his department on having done some needed work in their districts.

“We’ve had some potholes patched in the Shawmut mill village area,” Clark said. “Residents wanted me to tell them they really liked it.”

Police Chief Tommy Weldon said that all three Ford Interceptor police vehicles had arrived at Valley Police Department. They were ordered in January but were delayed by the COVID-19 shutdown. Two of them arrived several weeks ago but a third one remained unaccounted for. Weldon said that a third vehicle had recently arrived and would be outfitted with new lighting and interior equipment before being put into service.

The city will be purchasing several more police vehicles in the current fiscal year, but won’t wait till January to order them.

Valley Parks & Recreation Director Laurie Blount informed the council that youth basketball would be taking place at the Community Center this year and that a scaled-back fall festival will be taking place as well. From 5-7 p.m. on Saturday, Oc. 31, a drive-through event will be taking place on the Sportsplex parking lot. Vendors will be lined up along the way, and children can receive bags of candy while seated in their car.

“We want to make it as safe as we can,” Blount said. “No one has to get out of their car.”

Blount was pleased to report that the attendance numbers at the Community Center are continuing to rise.

The next regular council session will take place at 6 p.m. EDT on Monday, Oct. 26th. The new administration will be sworn in at 6 p.m. on Monday, Nov. 2nd. The meeting will be taking place inside the Community Room at Valley Community Center.

“Having it in the big gym will allow for more social distancing,” Riley said.

The new council will be almost identical to the current one. Riley and council members Clark, Jim Jones, Randall Maddux, Marquetta Madden, Henry Cooper and Gilson will be returning for new four-year terms. The only new member will be Kendall Andrews in District 5. He will be succeeding Cassie Carlisle, who chose not to seek re-election.