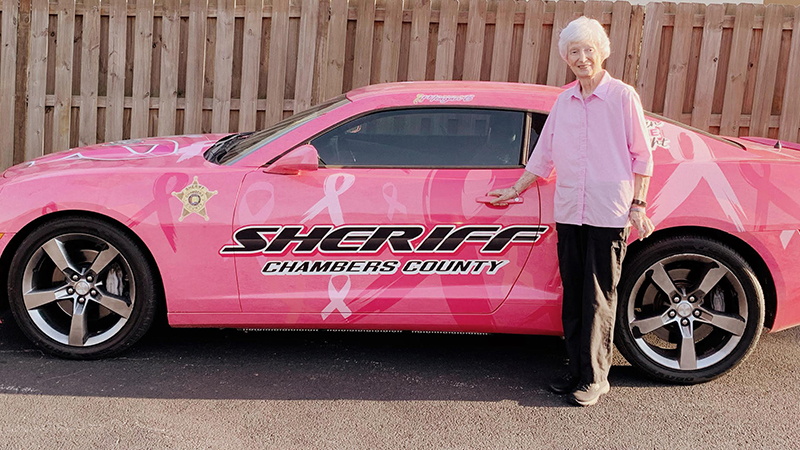 VALLEY — Geneva Mann wanted to see the Chambers County Sheriff’s Office new Meagan Car. She got that chance on Thursday afternoon, as well as a chance to pose for photos with Sheriff Sid Lockhart and Major T.J. Wood.

She also got to sit behind the wheel.

Meagan’s car was on display at the Kiwanis Club of Valley’s annual fish fry for the residents of Sylvia Word Manor. The sheriff and Major Wood were there cooking the fish, and Mann drove over the see the car. She lives in Chambers County’s Penton community and is undergoing treatment for breast cancer. She had her last chemo treatment on Sept. 9 and is now going through six weeks of radiation treatments.

Meagan’s Car is a 2012 Chevrolet Camaro that was seized by the Chambers County Drug Task Force in a drug-related arrest. It was forfeited to the drug task force in a court action and was used by task force agents before undergoing the conversion to Meagan’s Car. The car now honors Meagan Bonner, who was only 10 years old when she died of a rare form of childhood cancer 17 years ago.

The Camaro looks like a brand new car that just rolled off the assembly line. Its hot pink look thanks to a wrap by All Star Graphics of Lanett. The car has also been equipped with after-market lighting by Unique Auto Solutions.

“Chambers County Sheriff” appears on both sides of the car in big lettering. Above the driver side door is the wording “In Dedication to Meagan B.” with a curled gold ribbon with the wording “Fight Childhood Cancer.”

The like-new car was unveiled at Renasant Bank’s annual jail-bail fundraiser for the Breast Cancer Research Foundation of Alabama, held on Thursday, Oct. 1. Meagan’s parents, Larry and Kim Bonner of Valley, were there to see it and were moved by it, knowing that this is a special way to keep their daughter’s memory alive.