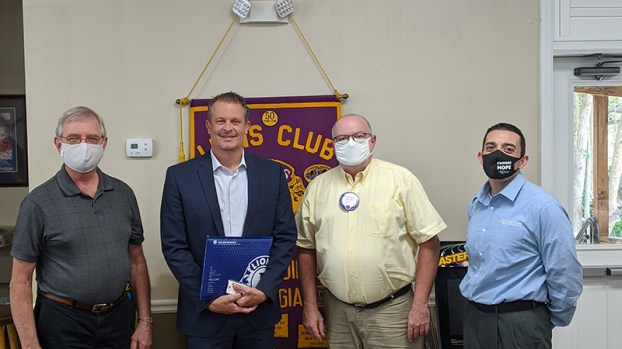 The ASCEND program was designed by Southern Union to help people get into the workforce and make a living.

On Wednesday, Circle of Care Executive Director Jonathan Herston spoke about the program at the West Point Lions Club. Circle of Care joined forces with Southern Union on ASCEND in December.

“The ASCEND program teaches basic workforce development skills,” Herston said. “What they have done is partner with a lot of the top employers. Especially around here, we have a lot of families that are unemployed or underemployed. We have a lot of folks that are going through staffing agencies, so they may be placed somewhere for a number of months, then the contract runs out, and they’re back in that cycle.”

Herston said the biggest drawbacks with staffing agencies are the jobs are not high paying, there aren’t benefits, and there isn’t a chance for career advancement.

The program runs on a monthly cycle, as classes meet four days a week for three hours.

As of now, there is a class at the Circle of Care, running from 5 p.m. to 8 p.m. at its new building in the Valley Medical Park. There is also one going on in Opelika.

“At the end of these four weeks, we bring in the hiring people from those businesses. They will do interviews with the participants in the program, and they get preferable hiring in those jobs,” Herston said. “It sets them up not just in the training but giving them an end-road with the best opportunities in our area for someone that has the capacity and ability.”

For those that have participated in the most recent ASCEND program with Southern Union, 59 of the 60 participants have been hired.

The first ASCEND class at Circle of Care was during the summer, but because of COVID-19, the classes were on a pause for about two months.

Herston also said Circle of Care is working with Southern Union to bring its Advanced Manufacturing Program to the Circle of Care.

“The advanced manufacturing program is something that is highly in demand,” Herston said. “We’ve had a couple of people placed out of that in just the past week. It brings a lot of opportunities for workplace development.”

The Circle of Care has also partnered with Auburn University to bring in the school’s marriage and family therapy center. Sessions are based on income starting at $20 on Mondays.

Before Herston spoke, the West Point Lions Club inducted Stephen Denny as a new member of the club. Denny is the new interim director of academics and student life at Springwood School.

Heard Sheriff: No evidence of foul play in Natalie Jones case, car was in woods ‘quite a while’

The Heard County Sheriff’s Office has not found any evidence of foul play in the disappearance of Natalie Jones, Sheriff... read more