Jones talks about his passion for Valley 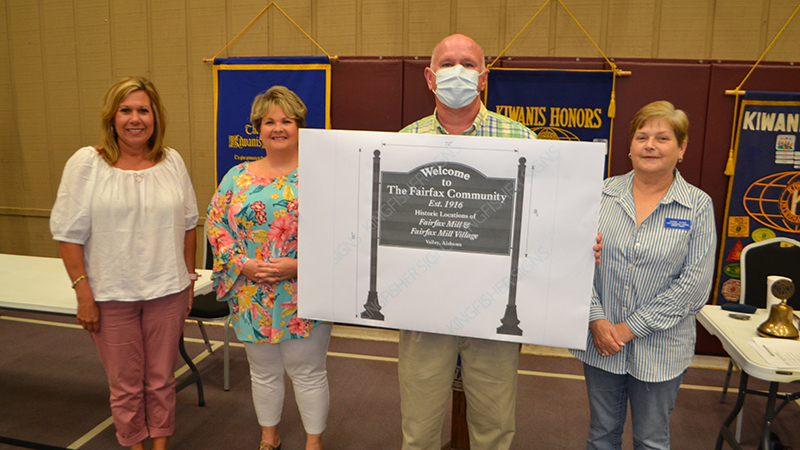 VALLEY — Jim Jones was born and raised in the Fairfax community, worked in Fairfax Mill and other WestPoint Stevens plants for 32 years and has represented the area as a member of the Valley City Council since 2000. Next Monday, he will be sworn into a new four-year term on the council. On Wednesday, he talked about the community he loves at Wednesday’s noon hour meeting of the Kiwanis Club of Valley.

Jones brought with him a large design of a new sign that will soon be going up off Highway 29 near Trammell Block. It’s a welcome to Fairfax sign that will be replacing one that had stood in the same area until the recent past. The new sign will cost around $6,0oo to build and have transported from Birmingham. The cost has been covered by private donations.

“I have talked to the mayor about it,” Jones said. ‘The city will be putting it up for us, and Chuck Rudd will be doing the landscaping around the sign. You may have noticed the great job he did at the Bethlehem Church cemetery. We think this new sign will be an attractive addition to the Fairfax community.”

Jones said that he’d like for the Shawmut, Langdale and River View communities to have similar welcoming signs.

The sign makes mention that Fairfax is home to the Fairfax mill village and was once home to Fairfax Mill.

“We don’t want to lose our history,” he said. “Lots of people throughout the Valley have some kind of connection to Fairfax Mill. They may have worked there at some time or had a family member or good friend who worked there. I went to work there when I was 16 years old. I must have gotten really dirty there at times when I was doing clean up work, but that’s all a part of learning a job.”

Jones said he’s been to the Fairfax Mill site lots of times in recent weeks to see progress of some major cleanup work. The city has received a $500,000 federal Brownfields grant to clean up the site and remove as much contamination as can be found. Lots of asbestos, petroleum remnants and arsenic from old coal piles have been taken to the Salem landfill. He estimates that the cleanup is approximately two-thirds completed. There’s a lot of broken brick and concrete on the site that can be used to fill up holes and help to level out the site. Plans are to have it grassed over as a greenspace site.

Jones said he would like for the site to be converted into some kind of park with walking trails, and artwork that celebrates the history of the mill and what it meant to the community.

“Maybe we could commission Chuck Moore to do something for us,” he said.

A Valley native and current resident, Moore has done some work with metal, stone and heart pine. Rusty and the Iron Family on permanent display near the Valley Farmer’s Market pavilion are examples of his work.

“I would like for the city to apply for additional grants to develop the site into walking trails and a park,” Jones said.

The original “Welcome to Fairfax” sign was erected in the 1950s, not too many years after Highway 29 was four-laned through the Valley. Back then, Highway 29 was a two-lane road the route turned in front of Trammell Block and went down what’s now Denson Street before turning back toward Crestview Ballpark and heading south across Osanippa Creek.

“I would like to find an old photo of the original sign,” Jones said. “It’s my understanding that a local garden club maintained the site and planted roses there. Maybe we could do something similar to that.”

Jones said he’d like to get the Valley Historic Preservation involved before he commits to the final design. In its present design, the sign notes that Fairfax was founded in 1916 and was home to Fairfax Mill and the Fairfax Mill Village. In its heyday, Fairfax was known as Towel City USA and Fairfax Mill was famous for Martex towels.

The new sign will have fluted posts that will be aluminized.

“They will be there long after I am gone,” Jones said. “I want something that looks historic. Fairfax is now part of the City of Valley but maintains its historic identity as a community. The same is true for River View, Langdale and Shawmut. I’d like for those communities to have similar signs.”

Jones said that a welcome to Fairfax sign off Highway 29 would be the answer to a prayer for him.

“I am for anything that uplifts our community and our city,” he said. “I love Fairfax in the same way many people who live there do. I want something special in a welcoming sign and an attraction at the mill site with artwork that pays tribute to our past, something that’s a reminder of what it once was.”

In the old days, huge community barbecues would take place across Boulevard from Fairfax Mill. Jones said he’d like for this tradition to continue with a Fairfax Mill Day.

“We can enhance what we have,” he said. “A new sign and a new greenspace site is a starting point. It’s something people can contribute their ideas to. I’m looking for feedback on this. Right now, I’m just trying to get the word out about what we are trying to do.”