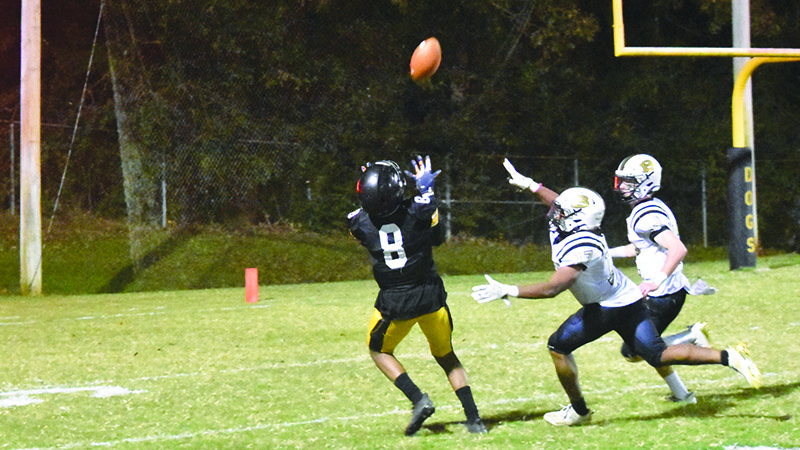 Coming into Friday, the LaFayette Bulldogs had already secured a playoff berth, but they wanted to finish the season on a five-game winning streak. They did just that by taking care of the Beulah Bobcats 46-20.

“I’m proud of all these coaches and proud of these players,” LaFayette head coach Juan Williams said. “They bought into what we’re doing. We started 0-4, and we were counted out. These kids came back and won five straight, and these kids said they were going to win five straight and they’ve done it. That’s the only thing you have in this world is your word. They worked hard, and they’ve done it. This past week was drive for five, now it’s take six.”

The Bulldogs took control of the game from the first possession. A bad exchange between the Bobcats center and quarterback led to a fumble, giving the Bulldogs the ball inside the Bobcat 30-yard line.

They scored a little less than two minutes later when senior running back Jay Daniel found the end zone from 17 yards out.

On their next possession, the Bulldogs scored in just one play, as sophomore Joshua Combs motioned from his receiver position and received a handoff, which he took around the right side of the formation for a 75-yard touchdown.

The two of the next three plays resulted in touchdowns, as on their first offensive play after allowing the second touchdown the Bobcats scored when senior quarterback Kaleb Abney hit Javuntae Paige in the middle of the field for a 79-yard score. LaFayette answered when Daniel took the ensuing kickoff 85 yards for a touchdown.

The Bulldogs scored two more touchdowns in the first half. Quarterback Ty Daniel hit Shawn Holloway in the middle of the field for a 76-yard touchdown, while Jay Daniel scored his third touchdown of the half, lowering his shoulder and riding a couple of Bobcats for the three-yard touchdown.

The Bobcats stole some momentum to start the second half, as they recovered an onside kick. They capped off the drive with a quarterback sneak by Abney to the left side of the formation for a three-yard score.

Jay Daniel had his final running touchdown of the game in the third quarter.

Sophomore Trenton Tucker also found the end zone for the Bulldogs, as he intercepted a pass and returned it 62 yards for a touchdown.

Abney finished the game’s scoring with a beautifully thrown touchdown pass to Noah Higdon in the fourth quarter.

With freshman running back Jacori Tarver out for the game, the Bobcats put the running game on running back Stanley Washington. There were very few yards to be found for the junior, but he fought hard for 82 yards on 27 carries.

“He’s a great leader. He’s going to be there next year for us,” Beulah head coach Matt Johnson said. “He ran every play offensively for us and defensively at corner. He never came off the field. He’s just a guy that we are just excited about next year.”

In the final game of his career, Abney finished with 223 yards of offense and three total touchdowns.

The Bulldogs will travel to Leroy in the first round of the AHSAA playoffs on Friday.

With the loss, the Bobcats finish the season at 1-9.

“We came into this thing, and we were a little bit down on our luck, but these guys fought until the end,” Johnson said. “I just challenged them coming into this thing. We don’t have everyone we need, but we got who we got, and these guys finished strong. I’m proud of our seniors. Their leadership throughout this year is unprecedented. These guys led us the whole way. I’m very thankful we got to finish the year. Our hats are off to our guys who didn’t quit.”