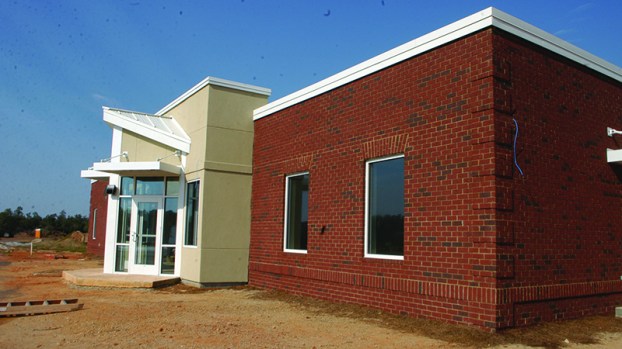 LANETT — Construction on a new $1 million 5,400-square-foot terminal at the Lanett Municipal Airport is coming along much faster than expected. At the outset, it was expected to be completed by mid-December.

The building is now an estimated 95 percent complete and is on schedule to be finished by the end of October. The new building will then be getting interior furnishings. That may take a couple of weeks. A grand opening will take place once the keys are turned over to the city by contractor River City Construction of Columbus, Georgia.

“We are proud of this building and want everyone to see it,” said Mayor Kyle McCoy.

At Monday’s meeting of the city council, Jody Lowery, the city’s point man on the airport project, provided an update on the project to council members. He told them that the work was in its final stages. The interior work that’s been done includes the installation of the ceiling tiles, all the doors and much of the touch-up work. The heating and air is in and is operating well. One of the final steps will be to finish the floor and to do some landscaping around the building.

Good weather has also helped with the runway construction. Evergreen Erosion Control of Opelika is working on a 1,000-foot expansion that will lengthen the runway from its present length of 4,400 feet to 5,400 feet, or more than one mile. There will be some wetlands work to take place on the southwest end. The course of a small stream will be redirected, and lots of sand, rock and dirt will be brought in to make it completely level. “The entire site will be level once the work is completed,” McCoy said.

The airport could be reopened to air traffic by November 2021.

The terminal will face the runway side. Those who will be working there will park behind the building and get to work via the present road that reaches the site from Cusseta Road, and the city hopes to eventually build a new road to the site off Phillips Road.

As a visitor enters the terminal from the airport side, they will be stepping into a very large lobby. To the left will be offices for the Chambers County Development Authority (CCDA). The airport side will be to the right. There will be a break room, a pilot’s lounge, a flight planning room and some city offices.

Chambers County will be one of few communities anywhere to have an economic development office at a city airport terminal. Business professionals who are interested in finding a site for expansion can literally land a business class jet on the Lanett runway and taxi within easy walking distance of a terminal where they can sit down and talk business.

“The expanded airport is going to be a tremendous asset,” McCoy said. “We can’t wait to get started with it.”