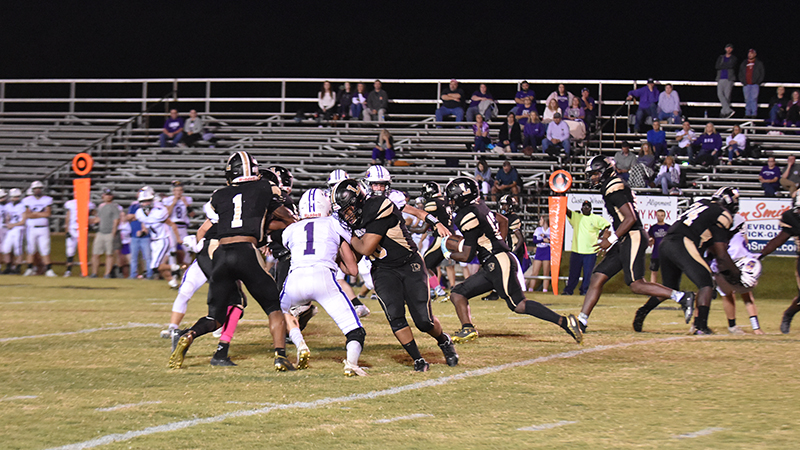 In the last four years, the Lanett Panthers have played 25 region opponents. The Panthers have walked away with 25 wins in that time span, with 24 wins by multiple possessions. The only close call was in 2019, when the Panthers, who were ranked fifth at the time of the game, escaped with a one-point win against Wadley.

On Friday, the Panthers face the toughest test of their regional schedule, as they face Randolph County.

The Tigers are the No. 1 team in 2A and are 7-0 on the season. Their closest game of the season was in week three when the Tigers made a fourth-quarter comeback against LaFayette.

“It’s really big,” head coach Clifford Story said. “I think this game is going to determine who is going to win the region. We both have one region game left, so beyond that, it’ll be head-to-head. It’s going to be big. They’re the No. 1 team in the state for a reason.”

Both the Tigers and Panthers are coming off big wins where their offenses showed out. The Tigers defeated Vincent 56-38. The 56 points are the most the Tigers have scored his season.

On the flip side, the Panthers are coming off a 48-0 win against Ranburne on Thursday. The Panthers dominated the first quarter in the win, which is something the Panthers coaching staff has been waiting for most of the season.

“I just told [the players] that it is just time to put a game together,” Story said. “Fortunately enough, they were able to make plays. We were hitting on all cylinders. That’s the kind of football Lanett plays. I tell them all the time, it’s business as usual. We’re not going backward. We just have to commit to what we need to do, stay locked in on what we need to do and stay disciplined on what we need to do. If they do that, we’ll be fine. I’m really confident in our team. I know we can stand up with the best of them.”

“Anytime you can get game experience, it just adds to you’re game because a lot of time when kids get under the lights, they can’t perform under the lights. They make excuses, and they look for ways to come out,” Story said. “But if you’ve been in a battle and you have experience in battle, then you can fight when you need to fight. I tell people all the time ‘you can’t become a dog if you’ve never been one.’ You become a dog by playing in big games like these.”

The Tigers have dominated their season by running behind their offensive line, which Story said was probably going to be the best offensive line that he has faced in a long time.

“They probably are going to be the best line that we’ve faced in a long time,” Story said. “They’re good and they’re physical. He [Tigers’ coach Pat Prestridge] rides his guys, and I don’t blame him. You have to play to your strengths and his offensive line is his strength. They’re his defensive line, and he even has them on the front line of kickoffs, so it’s going to be a tough challenge.”

“We’re just going to have to fight with them,” Story said. “I want to see if my kids can stand up and fight because one it will do is it’ll let me know that they’ll fight when they need to fight. One thing about my team is they rise to the challenge when it’s a big game, and they step up in big games.”

Offensively, Story is looking for his offensive line to be able to give his quarterbacks time in the pocket to make plays downfield. If the offensive line can give them time, the Panthers have the advantage in the secondary, as they have athletes at every level that can make plays.

One disadvantage the Panthers have is they are playing on the road. Randolph County is about a 45-minute drive and is the hardest place the Panthers will play during the regular season. The last time the Tigers lost a home regular-season game was in 2018.

“It’s really tough. It always has been and always will,” Story said. “They just have one of those winning cultures as well. They have state championship pedigree. They don’t lose much up there. When you play a team that isn’t used to losing, you just have to make sure you go into that environment and compete.”