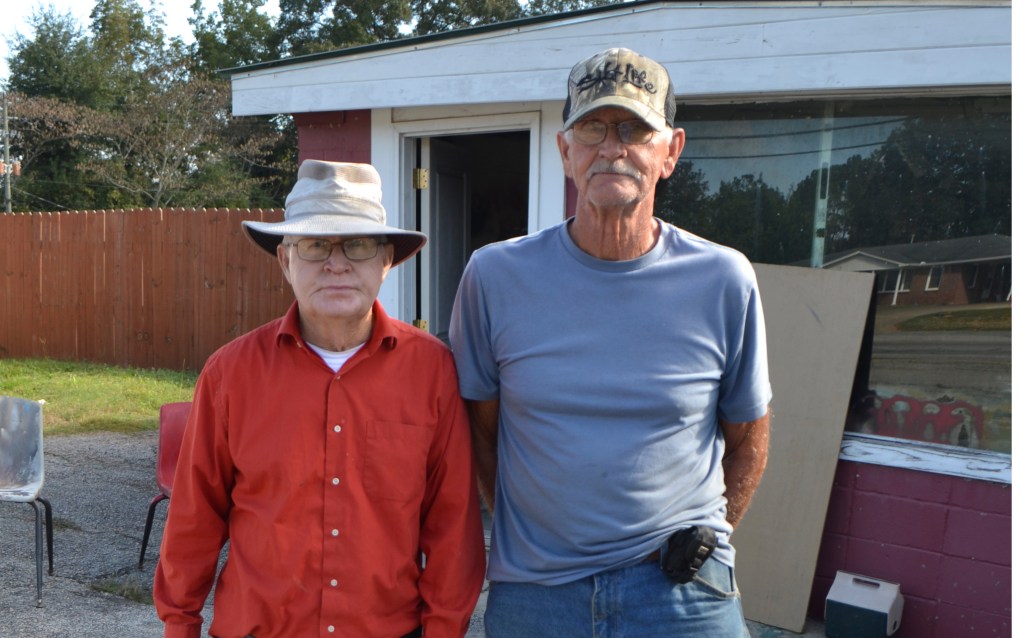 The one way to stay sharp in any competitive event is to practice, practice, practice. People driving up and down Highway 29 in Valley frequently see Herschel Foster (above) and Frank Billingsley practicing on a horseshoe pit set up outside Foster’s Used Cars, a business Mr. Foster has owned and operated since 1982. --Wayne Clark

VALLEY — People who do much driving on the section of Highway 29 that runs between Valley Walmart and the entrance to EAMC-Lanier Hospital have no doubt seen two guys pitching horseshoes next to Foster’s Used Cars. Those two guys are Herschel Foster, who owns the car lot, and his good friend Frank Billingsley.

“We are out there almost every day we have good weather,” Foster said.

Billingsley said that he was waiting to get a haircut in LaGrange one day when a customer getting a trim started talking about pitching horseshoes.

“If you ever want to see two men who are really into it, you need to drive down to Valley,” told the barber. “There are two guys off Highway 29 past Walmart who are out here playing almost every day.”

Billingsley sat there quietly with a grin on his face.

“Steve Sorrell, who runs House of Flowers across the highway, tells us that people are always asking him about us,” Foster said. “He told me that one day when it was snowing someone called him to ask if we were out there pitching horseshoes in the snow. No, we weren’t out there that day, but if the weather had been good we would have been.”

Foster and Billingsley don’t just pitch horseshoes a lot, they are very good at it. They are championship-level competitors and have been all over the U.S. taking part in elite meets.

“We went to the world championship one year in Buffalo, New York,” Foster said.

“The world championship is really something. There are 1,500 people there from all over the world, and all of them are really, really good at pitching horseshoes. There are at least 50 pits set up for people to practice, and you are hearing the clink of horseshoes hitting the post all the time.”

Earlier this month, Foster won the Alabama state championship in his class. Because he has a disability, he completes at Level C in the senior division. Since he has to wear a knee brace, he can pitch them from 30 feet away rather than the standard 40 feet. He’s really proud of the trophy and patch he received as this year’s champion.

Even with the knee brace, Foster gets around really well for someone who’s 73.

Billingsley is 78 and still competes in the 40-foot throws. Several years ago, he came really close to winning the national championship in his age division. He was leading going into the final round and was edged out by another competitor on his final throw. “I thought we were finished, but they told me there was one more round,” he said.

The best horseshoe pitcher in Alabama is a man named Dam Watson of Hazel Green.

“I have finished second or third to him many times,” Billingsley said. “He’s No. 1 in Alabama and No. 10 in the nation. The best in the U.S. is a man named Allen Francis. He’s from Ohio and consistently scores in the 92 percent range. That is unreal. You are doing really good to score in the 60 and 70 percent range.”

To Foster and Billingsley, pitching horseshoes isn’t something one does for fun and on the spur of the moment.

It’s a serious sport that one prepares for to win at the highest level. They always use regulation horseshoes.

“The first thing they do when you go to a meet is look at your horseshoes,” Foster said. “They have to be of the right size and weight. If they are not, you are disqualified. We also use Kentucky blue clay. It’s shipped here from Kentucky and makes the best landing surface you can find. The horseshoe will stay put where it lands. It won’t slide around.”

Kentucky blue clay is used in all the competitive meets. It’s wise to practice on it and to know how your horseshoe reacts when landing on it.

“I can remember going to the Wood Chip School at the foot of Cheaha Mountain when I was a boy,” he said. “I later went to schools in Oxford and in Heflin. I loved playing basketball when I was in school.”

The two friends love practicing together and planning on their next meet.

“The national finals were set for Monroe, Louisiana this year but got canceled due to COVID,” Billingsley said. “Next year’s national championship will be in Nevada. We would love to go there if we could.”

Foster’s Used Cars is one of the more venerable businesses in the Valley. It’s been in the same location since 1982. Many businesses have come and gone since then, but Mr. Herschel has kept his business running.

It’s not every business where you can set up a horseshoe pit just outside the front door and practice the sport you love to play with your best friend.

Foster said he used to be really good in ping pong, but doesn’t play it much anymore because of his knees. He has competed in ping pong for the Valley team in the Senior Masters Games. When asked if he’s ever pitched horseshoes at the senior games, Foster said that it’s not the kind of horseshoes he likes to play. He’s a serious pitcher, and it’s just for fun at the Masters Games. He can’t resist joking a bit about it.