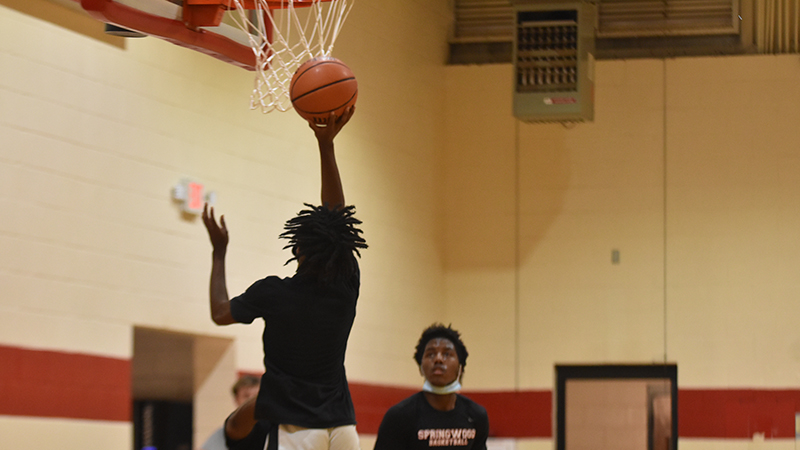 When head coach Lisa Sampson took over the Springwood boys’ basketball team before the start of the 2019-20 season, she knew she had her work cut out for her.

She was taking over a team that was winless the year before and didn’t have a winning culture.

The Wildcats made a huge turnaround in Sampson’s first season, reaching the first round of the AISA basketball playoffs and defeated Chambers Academy. More importantly, she was able to start building a winning culture.

“Practice is fun. Practice is exciting,” Sampson said of the team’s start to practice. “The chemistry that I’m seeing with them already is just great. We did okay last year, and we want to take it up a notch. These seniors want to go to state, so that’s our goal.”

“We really want to play really strong, skillful and as a team this year,” senior forward Tyrese Ferguson said. “We want to run the ball really quick up the floor and push the ball up the floor because we have a quicker team than last year. Everyone’s more athletic.”

The 2020-21 Wildcats are a completely different team from a year ago. They graduated most of their varsity team from a year ago, losing 10 of the 13 players on the roster. To help add to the team, Ferguson and Sampson brought in a couple of players from Auburn High School, adding senior DQ Cameron and Calvin Crabb. Jayden Lenz is an international student from the United Kingdom, who Sampson is also excited about.

They also made additions from within, promoting several sophomores to the varsity squad, who were in Sampson’s system on the junior varsity team a year ago.

“Completely different team,” Sampson said. “I’m excited about this year, with our ninth graders that moved up, who were in the system last year and adding Jayden Lenz from the UK and our two Auburn kids in DQ Cameron and Calvin Crabb. Just another dimension of what we can do offensively and defensively.”

Since the Wildcats were able to add more athleticism this season and the players that were in the system are familiar with Sampson’s coaching and system, Sampson believes this team will be able to just play basketball.

“We’re going to change a little bit less structured, just teaching them the game and letting them read and react,” Sampson said. “We’re going to play faster because we can. Last year, we had two great seniors in Francis [Okeyia] and Coleman [Hull], who led us. Now we’re just a more balanced attack that can do some different things.”

Last season, Okyeia was the Wildcats’ do-it-all player, leading the team in scoring, assists and rebounding finishing with 19.6 points, 6.7 assists and 11 rebounds a game.

Now, it’s Ferguson’s chance to step into that role.

“Its’ funny, before COVID, we had plans to attend camps as a team and really work to get better. That was obviously scratched, but I’m going to hand it to these kids that have put in the work all summer, and Tyrese is one of those kids,” Sampson said. “He was living in Atlanta with his aunt. He’s a different player, both offensively and defensively. He’s got a shot, he’s rebounding. He’s doing the little things, and it’s all clicking for him.”

Fergusons’ growth came from hard work and just getting more comfortable in basketball in the United States.

“Last year, I didn’t have the greatest season, and I’m going to show that this year,” Ferguson said. “I’m more confident now, and I’m more familiar with the basketball transition from the UK to the US. I know that I have a big role to play because I want to get as many offers as I can. I also want to do something good for Springwood history. I’m really trying to be a big leader on the team and help us come out really strong this season and win state.”