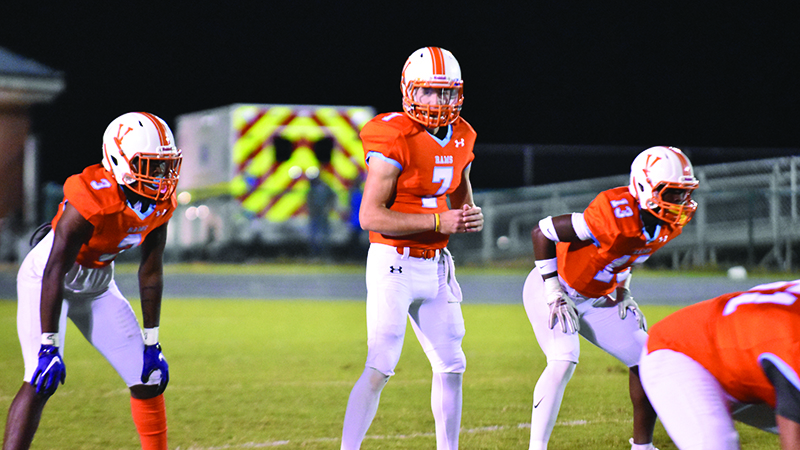 On Sunday, the Valley Rams football team was coming to the field house like they normally did on Sundays. They were coming off their worst defeat of the year (a 44-14 loss to Eufaula) and were looking to rebound against Park Crossing.

When they got to the facility, head coach Adam Hunter had to break the news to his team. There was a positive COVID-19 test on the team and about 20 players were going to need to go into quarantine.

“We were ready to come to film, and all of us are sitting outside. We had heard some stuff that we weren’t going to be able to play the next two games, but none of us thought that we were going to be out of school and quarantined,” senior quarterback Will Kennedy said. “You keep it in the back of your mind and see it happen to other schools, but you never think that it’s going to happen to you.”

Hunter informed the players who would need to quarantine and the next two games, the Park Crossing and Opelika, were officially canceled.

“The first thing that came to mind was my future, like what I’m going to do after,” linebacker Tino Linson said. “I love the game of football, it’s everything to me. It broke my heart. It came out of nowhere. We were coming off a loss, and we were coming back to practice to correct all the mistakes. I wasn’t expecting it at all.”

The game against Opelika was scheduled to be the final home game of the season for the Rams, but last Friday’s loss to Eufaula turned out to be the final time the 16 seniors would suit up in Ram Stadium.

“I didn’t take it lightly,” senior linebacker Dalton Dunn said. “I enjoyed the time we did play. Now that I know that I won’t be in Rams Stadium again, it hurts.”

The 2020 season was never taken for granted. Before the very first game of the season, Hunter told his team to play like it was the last time they would be able to put on shoulder pads due to the uncertainty surrounding the coronavirus.

Before Sunday’s announcement, Valley had one game canceled earlier in the year when Russell County shut down its team for a couple of weeks because of a positive test.

“It hit me in the summertime when we were working out,” Dunn said. “I didn’t know when our last game was. We started late with our head coach, so I had been thinking about it early. I was preparing myself for what could happen. I didn’t want to be caught off guard.”

The Rams made an impact early this season. They started 4-1, which includes a win against Lanett on the road and two region wins before their bye week.

The Rams travel to Robert E Lee for their final game of the season on Oct. 22.

“I’m going to just go out and have fun because that’s all we can do at this point,” Linson said. “We all are just trying to enjoy our last game and go out with a bang.”