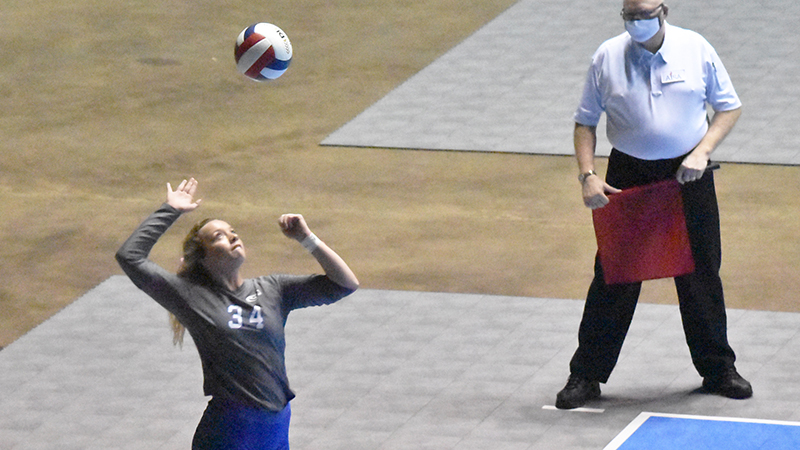 Chambers Academy volleyball is once again on the doorstep of a state championship, a spot they were in just a year ago.

In 2019, the Rebels got behind early and couldn’t make up ground, losing to Southern Academy in the championship game, but a year later, they are hoping to bring in the school’s first varsity volleyball championship.

“It’s pretty spectacular to get to this level,” head coach Randy Bonds said. “I’m sure they’re also very nervous about it. Last year we made it to the same level, and the outcome was not in our favor. Hopefully, this year with all the extra practice, all the extra little details we’ve been working on, we’ll be victorious this year. It’d be awesome for the school and awesome for the girls.”

Bonds believes that the difference between being swept, like the team was a year ago, and a championship is utilizing the fundamentals of the game, and making sure the team is making easy plays.

“We’ve been working a lot more on the fundamentals, making sure that we have a lot more consistency, covering the court better and our attitudes. All these little tiny things added up quite a bit,” Bonds said.

The Rebels have also been able to adjust throughout the year. One of those subtle adjustments was a slight rotation change that allowed junior Mattie Reese to take the team’s first serve, something that proved to be a huge success against South Choctaw, as Reese finished with 13 aces in the match.

“That was a major shift we made in the last two or three matches,” Bonds said. “We brought her in because she does have an outstanding and unique serve. It’s extremely hard to pass, so we brought her in, running backcourt for Natalie [Lovelace]. She’s an outstanding server most of the time when she’s on, so we’re going to keep running that.”

The Rebels were in a dogfight at the end of their sweep against Hooper but were able to piece together a rally trailing by four at match point, claiming the final six points of the match.

After defeating Hooper, Bonds said he was going to make sure to preach to his team about their energy level staying high throughout the highs and lows of the match. That was evident during the Rebels’ final practice of 2020.

“We’re trying to keep the energy level up,” Bonds said. “Sometimes the girls, depending on the way the game is going, will let that slip. A lot of the game’s outcome depends on that energy level, so we try to get them to work on that. They did a good job of that yesterday [Tuesday], which is why they were able to come back at the end there.”

While the Rebels were a dominant team all season, they will have their toughest match of the year on Thursday in Garrett Coliseum.

They face off against Edgewood, who has won three state championships since 2016.

“We’ve studied them a little bit,” Bonds said. “They do have some solid players.”

The difference between the Wildcats and most teams that play in any classification of high school is their ability to play fast, something that can cause a lot of problems in a team’s spacing.

“They have a quicker play style, and that is something that none of the other teams have in the region [or] in this league,” Bonds said. “It makes it a lot more challenging for us, so I try to teach them a little bit about speeding up their play. If we don’t stay with that, it will affect the game.”

Unlike some teams that try to slow down the pace against the Wildcats, most of the time to no avail, Bonds is planning to get his team to play quickly and match the Wildcats’ pace on the court.

“I actually like the speed of play being a lot quicker. That’s something as a team that we have been working on, but it’s hard at this level to teach players that speed of play,” Bonds said. “The fact that Edgewood has been doing that year after year is pretty spectacular. It’s something that we’ve discussed, but it’s just really hard. It takes a special player to be able to do that well.”

The AISA Class AA State Championship will be at 1 p.m. CT at Garrett Coliseum in Montgomery on Thursday.