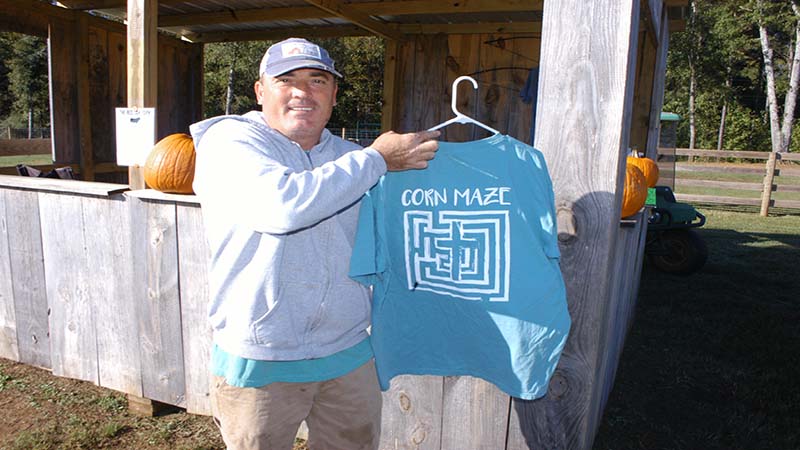 CUSSETA — James Gilbert has been with the Auburn Fire Department for 23 years. He has risen to the rank of lieutenant and is planning on retiring in a couple of years. Rather than taking it easy and being idle, he has big plans for a new career. He’s the owner of a 200-acre cattle farm approximately three-and-a-half miles north of the crossroads in Cusseta. In addition to raising Black Angus cattle, he’ll also be getting into what’s known as agri-tourism. Red Oak Farm is already open as a fun place for the whole family, and Gilbert has plans for making it much bigger by the time he devotes full time to it in 2022.

There’s a five-acre Christian-themed corn maze people can have lots of fun finding their way out of. You know you are in the middle of it once you reach an area shaped like a giant cross.

“I’m big on religion, and I want this farm to get that across,” Gilbert said.

The front 30 acres off County Road 83 is the fun area for visitors. There’s plenty of room for hay rides,  a pedal car track, a barnyard play area for kids complete with duck races, photo areas, a place to test one’s accuracy in throwing a football and a place where city kids can be close to baby goats, donkeys and chickens. They can also experience the thrill of a pony ride.

“We’re just starting out now, but I would like for The Red Oak Farm to be a place where people could come to from all over the state. People from Birmingham and Huntsville could stop here when they are traveling to or from an Auburn football game. We plan on having barbecues here in the future. We will set it up under one of the pole barns we have here. There’s an area just off the road where we could park several hundred cars at one time.”

Gilbert said that long-time Chambers County residents might know the location of The Red Oak Farm when told it was part of the old 600-acre Draper Farm. It’s located between Cusseta and LaFayette not far from the Chambers County Lake. The land was clear cut before he got it. That’s OK if you plan to cattle farm and to get into agri-tourism.

“I grew up on a farm in Meriwether County, Georgia near Woodbury,” Gilbert said. “My dad (Travis Gilbert) has helped me a lot on the farm. He loves the farming life and just about grew up on a tractor. When I asked him what he thought about having a farm in Alabama, he told me it was all right with him as long as he could still sit on a tractor and work.”

The elder Gilbert said that he’s a John Deere guy but also likes a German-made tractor known as the Deutz.

“They have air-cooled engines and can still run when they get hot,” he said.

“People often ask me if The Red Oak Farm is a pumpkin patch,” Gilbert said. “We do grow pumpkins here, but I prefer to think of it as a family fun place.

By the time I retire from the fire department 18 months from now, I want people to know it as a fun place to come to and a place where kids can see where their groceries come from. They don’t come from stores, they come from farms. We want people to experience what farming is like.”

The Red Oak Farm is already a pastoral setting with a large cornfield, a pumpkin patch, a blueberry plot, cleared rolling hills and a winding country road ideal for a hayride.

One of Gilbert’s favorite places on the farm is an old-fashioned swing set. The seats are made from red oak that was harvested on the farm.

“We’ve been open on weekends this month,” Gilbert said. “The rain from the hurricane messed us up last weekend, but we plan to be here through the 31st. Right now, we are just trying to get our name out there. Eventually, we’d like to be seen as a destination, a place where people could go to have birthday parties and family get-togethers. We want everything on the farm to be natural and beautiful.

If we can make The Red Oak Farm appealing enough so that today’s kids have a great time when they come here, they will want their kids to come here one day when they are grown and later on their grandkids. I’ve always been a people person. I love being around people and interacting with them.”

“We think that’s an ideal time. You don’t want it too long or too short,” Gilbert said. “It takes you to the back side of the farm, and you can get the idea of everything we do here. We will do something special for Christmas in 2021.”

Gilbert said much thought and planning had been put into what The Red Oak Farm will become. “We are trying to build something special for the public,” he said. “We want people to come here and have a fun outing. We will have refreshments on site.

There will be cold drinks and snacks. If it’s chilly, we’ll have hot chocolate. We are looking at having food trucks here on the weekends.”

The regular admission price is $10 per person, $5 for seniors and $5 for anyone with a military ID. Children two years of age and younger are admitted free.

This includes all activities except for food and drinks, pumpkins and pony rides.