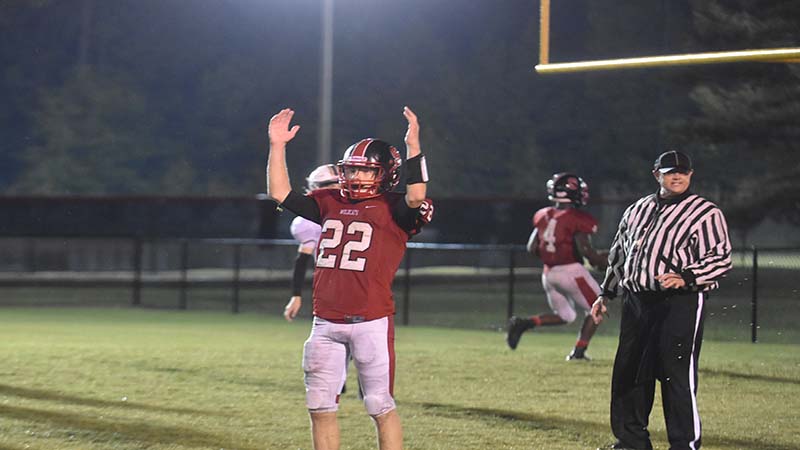 Friday’s win against Cornerstone was the Springwood Wildcats’ best game of the season offensively and defensively.

They put up a season-high in points, scoring on almost every possession. They showed their explosiveness, scoring three times in one play, while also being able to slow the game down and have a methodical drive.

“We played better, but the competition wasn’t as strong so that helps,” head coach John Gartman said. “With that being said, we scored 34 points in the first half, so we did about as well as we could do.”

Defensively, they shut down Cornerstone, finishing with their first shutout of the season.

“I thought we played very well on defense,” Gartman said. “We got after it, and they never really threatened. We had several guys that played really well.”

The Chargers got inside the Wildcats red zone only once, late in the fourth quarter. The Wildcats had most of their second team at that point, but they held strong.

The Wildcats turn their attention to the remaining two teams in their regional schedule, facing first Edgewood then Macon-East.

Macon-East is currently in first place in the region with a 2-0 record. Edgewood, at 2-1, is second since its loss is to Macon-East. Springwood is currently fourth, which is good for a playoff spot, as it is 1-1 in its two region games this year.

Edgewood is Springwood’s next regional game.

Edgewood is coming off its biggest win of the season, defeating then-No. 2 Chambers Academy in a one-possession game. Edgewood, who was unranked last Friday, is now the No. 9 team in AISA.

“I was impressed with Edgewood,” Gartman said. “I think they’ve improved a good bit throughout the year. From what I saw of them on film early in the year, I thought they were good, but they look a lot better now. It’s a pretty big challenge for us.”

Edgewood’s strength is its offensive line, which controlled the line of scrimmage against Chambers Academy for most of the game.

Gartman was also impressed with Edgewood’s quarterback and running back.

“I was really impressed with their quarterback. He’s just a sophomore, and he threw it around really well,” Gartman said. “They’ve got a running back [Mitchell Boyd] who seems like he’s been there quite a while, so they have some good skill on offense. They have some very good linemen on both sides of the ball too. They’re very strong overall as a team.”

With the Wildcats’ win against Banks and Banks losing all three of its region games this season, the Wildcats have already secured a playoff spot. A win on Friday could help improve their seeding and help give them a favorable matchup in the first round.

“We’re just working on ourselves this week,” Gartman said. “[Wednesday] is going to be a really important day for us. We’ve gotten off to a good start, so hopefully, we can finish the day strong and finish the week strong.”

Gartman’s biggest takeaway from Fridays’ win was the fact this team controlled the line of scrimmage. That will be the Wildcats’ top priority on Friday so their run-first offense can help control the flow of the game.

“We need to have good solid drives and capitalize on them,” Gartman said. “We need to keep the ball away from them because they’re pretty explosive. On defense, we definitely need to keep them away from making big plays. We need to prevent big plays and make them earn everything they get. Hopefully, we can get some breaks along the way and make a good game out of it.”