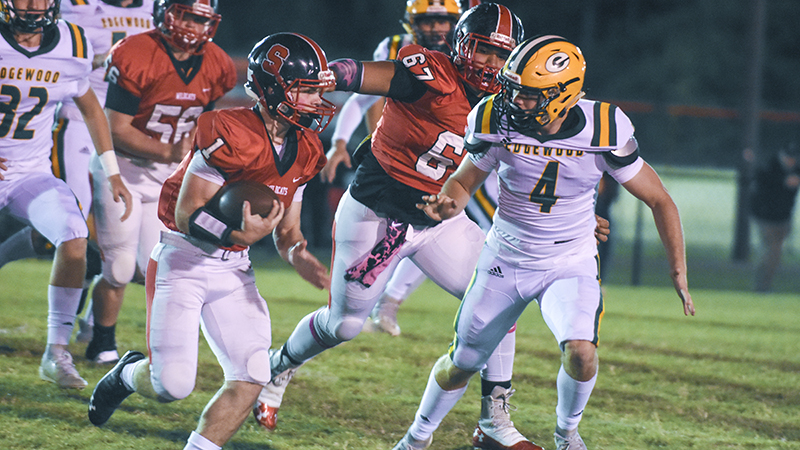 Edgewood Academy won its second straight road game in Chambers County Friday night, but Springwood School kept it competitive most of the night.

No. 9 Edgewood, which pulled off an upset of Chambers Academy last week, led by as many as 29 points, but Springwood scored twice late to make the final score 35-19.

“Edgewood beat Chambers last week, which was a real surprising win to me, so we knew we were going up against a really good team,” said Springwood coach John Gartman. “We weren’t intimidated. We came out in the very beginning and got after it. Over the course of a season, you’re going to win some games, you’re going to lose some games but the one thing you can always do is play with effort, no matter which side of the scoreboard you’re on. I was very pleased with the effort.”

The first quarter was competitive, with Springwood stopping Edgewood on fourth down on the visiting Wildcats’ first drive of the game.

After unsuccessful drives by both teams, it appeared the quarter would end without a score, but Edgewood gambled on fourth down again to get the game’s first touchdown.

On the play, quarterback Austin Champion threw a 36-yard touchdown pass to Carson Peevy to put Edgewood up 7-0 with 28.3 seconds left in the first quarter. Sam Williams added the extra point, his first of five on the night.

Edgewood added to its lead with 8:03 left in the second quarter after Mitchell Boyd scored on a 2-yard run. A few minutes later — following a Springwood punt — Edgewood tacked on another touchdown as JT Brazell caught a short pass and stayed on his feet to reach the end zone.

Springwood answered with one of its best drives of the night. OJ Tolbert capped the drive with a 3-yard touchdown run up the middle to pull Springwood within 21-6 going into the half.

After the touchdown, Springwood called a successful fake two-point pass to Cayden Cook, who lined up near the sideline and was wide open in the end zone. However, the play was called back due to Sides being ineligible, and the extra point was blocked.

Edgewood started the second half with another long touchdown drive, with many of the plays going around the left end. The visiting Wildcats capped the drive with a 2-yard touchdown run by Alex Johnson to make the score 28-6.

Edgewood’s final touchdown of the night came up a 3-yard run by Bradley Boone with 10:30 left in the game.

Springwood answered with two scores in the final five minutes.

Edgewood (6-2) hosts Crenshaw Academy next week, while Springwood (3-5) will play at Macon East. Springwood is locked into the playoffs and a win over Macon East could result in Springwood finishing third in the region, if the right tiebreakers work out.