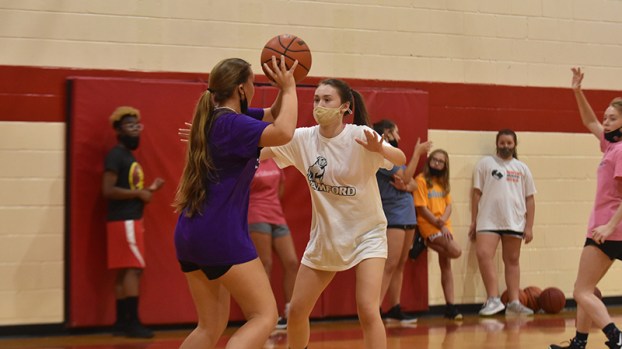 The Springwood girls basketball team had one of its best seasons since reaching the state quarterfinals in the 2016-17 season, as it was one of the top AISA teams for most of last season.

The Wildcats faded down the stretch, struggling in 2020 as they faced a tough second half of the season, reaching the playoffs but losing in the first round in a close game.

The 2020-21 Wildcats are going to look different this upcoming season.

The first change is who is at the helm. Head coach Lisa Sampson is still going to be with the team, but she will be taking a backup role allowing Michael Jenkins to lead the Wildcats as head coach this season.

“I’m just excited. Last year was kind of dipping my feet in the water a little bit, but this year we’re kind of going headfirst with the varsity job,” Jenkins said. “It’s really nice because Lisa and I could really start teaching things, so this year we could walk in and say ‘do you remember this drill from last year? … We didn’t have to build from the ground up.”

Jenkins was part of the coaching staff a year ago and worked closely with Sampson.

The other big change is the leadership on the floor. The Wildcats had two captains a year ago in McKayla Barber and Andie Martin. On the stat sheet, they were two of the three best players on the team, but they were able to bring more than just their stats to the Wildcats. They were leaders on the court.

“We are losing two of the best leaders I’ve ever seen,” Jenkins said. “I’ve never seen two leaders at a high school level lead like them, so we’re missing their voices just as much as their ability to play.”

The Wildcats bring back three seniors from a year ago in Courtney Easlick, Emily Drake and Lucy Spivey, who is coming off a torn ACL. They also bring back Tori Patillo, who was a sixth-grader last season that led the team in scoring.

Patillo and Drake have emerged as two of the team’s leaders this season.

“We had two really good players last year, and they were really good leaders,” Drake said. “They kept the excitement up. I feel they prepared us. We’ve been really close the last few years because a lot of the people were on that team last year, so it’s kind of easy to step into that role.”

“Emily Drake has stepped into her role phenomenally,” Jenkins added. “Tori Patillo is a seventh-grader but acts like she’s 20. It’s kind of intimidating, but she’s super talented and she’s done a good job leading. Our other three seniors Meridith Woodham, Courtney Easlick and Lucy Spivey all do a really good job. They learned a lot from McKayla and Andie last year.”

The Wildcats also added a pair of seniors in Meridith Woodham and Natalia Extremina, who is an exchange student from Spain.

A player to watch on the Wildcats team is Tesia Garrett Hammett, whose sisters were key in bringing the last basketball championship to Springwood in 2016. She was a role player as an eighth-grader last year, but she is expected to step into a starting role as a freshman.

When head coach Lisa Sampson took over the Springwood boys’ basketball team before the start of the 2019-20 season, she... read more