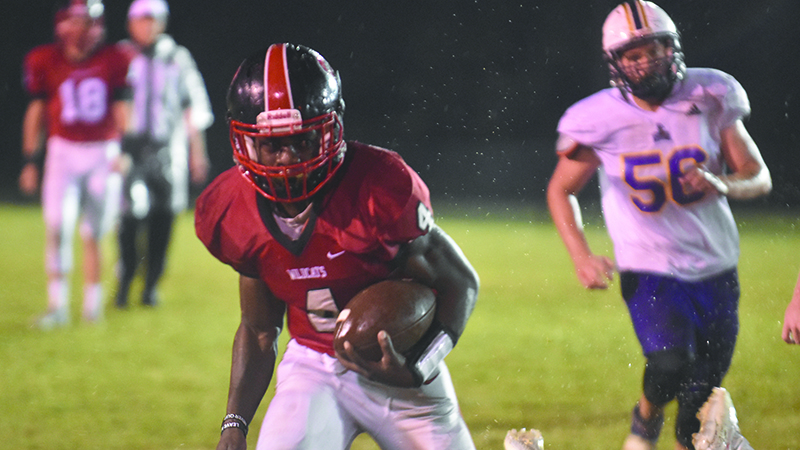 On Springwood’s first offensive play of the game, senior running back OJ Tolbert took a handoff and followed his blockers around to the left side. After getting to the corner, he simply outran the entire Cornerstone defense and scored from 39-yards out.

The Wildcats, led by Tolbert, torched the Chargers in the first half, jumping out to a 34-point lead by halftime. They finished with a 41-0 win.

The win snaps a two-game losing streak for the Wildcats.

Tolbert finished with four touchdowns in the first half of the game.

After the opening touchdown, Tolbert found the end zone on the Wildcats second possession, scoring on a power run up the middle from two yards out.

“Our inside run was working for us a lot,” Tolbert said. “That’s what we started off with when I got the first opening touchdown on offense. After that, the offensive line just put in work and got the job done.”

On the last play of the first half, Tolbert scored his fourth touchdown of the half. He received the handoff with the final seven seconds ticking away. He found a small crease and plunged through it, sprinting ahead 38 yards.

Tolbert’s night was done after the first offensive play in the second half. The Wildcats ran the same play to open the second half that they did to open the game, an inside run that Tolbert bounced to the outside. Like he did in the first quarter, the senior took the ball to the end zone, scoring from 41 yards out this time.

“He did very well,” Gartman said. “The offensive line did a great job blocking on the trap, and OJ  is quick and he’s explosive. He slipped through and got some good yardage for us.”

Tolbert finished with 235 yards on 15 carries.

Fellow senior Kannon Key scored the only other Wildcat touchdown of the game. Key followed his blocks on the right side and ran into the end zone for a 7-yard score.

Along with their explosive offensive night, the Wildcats turned in their best defensive game of the season.

On almost every Charger offensive play, there was a Wildcat that was able to find his way into the backfield. They limited the Chargers to only two first-half first downs, one of which was by a penalty.

They also forced a couple of fumbles and bad punts.

Sophomore Cayden Cook was the defensive star of the game. Cook finished with five tackles in the first quarter, one of which was for a loss and was constantly flying around the Charger backfield making stops or changes of direction.

“He played very well for us. I was proud of him,” Gartman said. “This is his first year with us, and he’s been a big addition for us on both sides of the ball.”

The Wildcats improve to 3-4 on the season. Their next two games are extremely important, as they face Edgewood and Macon-East, both of which are in their region. As of Friday, the Wildcats are the fourth team in Region 1. A pair of wins could move them all the way up to second place in the region.

Springwood is at home against Edgewood next Friday for their third region game of the season.