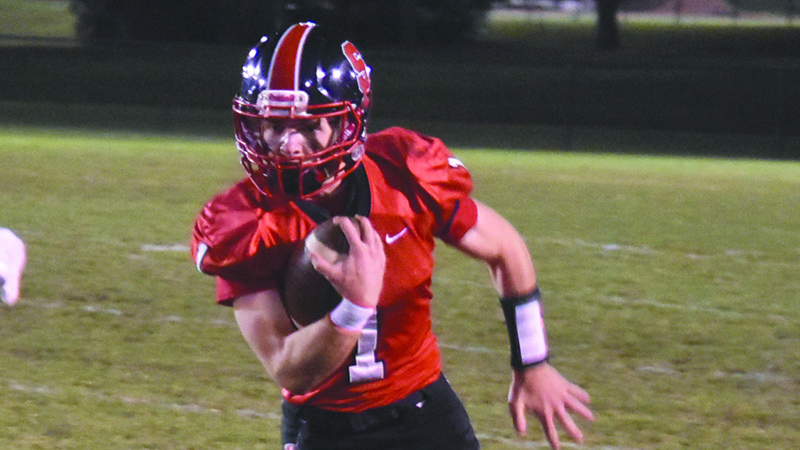 After struggling in almost all areas of the game against Macon-East, Springwood needed to get some momentum heading into a tough playoff matchup against No.3 Escambia.

They accomplished that goal with a resounding 44-26 win against Lakeside on Thursday.

“For us, it’s not really what we do. It comes down to execution,” head coach John Gartman said. “Offensively, I thought we were kind of hit or miss. What blew the game open was that last possession of the first half and the first couple possessions in the third quarter. Overall, I thought it was a pretty sloppy game, but at least we won, so I’m proud of that.”

After a sloppy first quarter, Springwood led by one, as senior Kannon Key scored the game’s first touchdown on a 12-yard run up the middle.

From the second quarter on, the Wildcats got into a groove that Lakeside struggled to get them out of the rest of the game.

Their hot streak started early. Just seconds into the second quarter, Key took a direct snap and charged up the middle. He cut to his left and was off to the races, going 40 yards for his second score of the game.

On the ensuing kickoff, Lakeside fumbled the kick, which was recovered by senior Andre Mills. The turnover proved to be a huge mistake as Springwood scored a couple of minutes later when senior tailback OJ Tolbert followed senior linemen Justin Henson down the right side of the line for his first touchdown of the night.

Even though the Wildcats had a 15-point lead, Lakeside didn’t go away, scoring a pair of touchdowns late in the second quarter, cutting the 15-point lead down to just three. The second Chief touchdown was scored with just 28 seconds left in the half.

Springwood, which is a very run-heavy team, was able to pick up big chunks of yards on a pair of passes to senior Will Craft, going for 32 and 26 yards. With one second left in the half, junior quarterback Cooper Champion took the snap, ran left and with a defender quickly incoming, lofted a pass to Tolbert, who fell into the end zone with a touchdown catch. The last-second touchdown gave Springwood a 10-point lead heading into the second half.

From the second half on, Tolbert dominated.

“OJ has been our workhorse since I got here,” Gartman said. “At the end of the day, players make plays, and he had some really good runs for us.”

Key scored the final points of the game when he got in the backfield and sacked the Lakeside quarterback in the end zone for a safety.

Tolbert and Key combined for 233 of the Wildcats 244 rushing yards in the game,  finishing with 118 and 115 respectively.

The Wildcats were able to add more of a Wildcat package on Thursday, which is something they’ve been working on for most of the season. Key was the spearhead of the attack, as he was able to make simple reads that worked out well for the Wildcats for most of the night.

“Kannon is kind of a jack-of-all-trades for us,” Gartman said. “He’s a very smart player. I thought the touchdown run he had in the first half on a read [the 40-yard touchdown run] was probably the best-executed play we’ve had this year. He’s got a lot of guts, and he’s very smart. Those two things go a long way on the football field.”

Springwood will travel to Escambia for the first round of the AISA. AA playoffs on Friday.