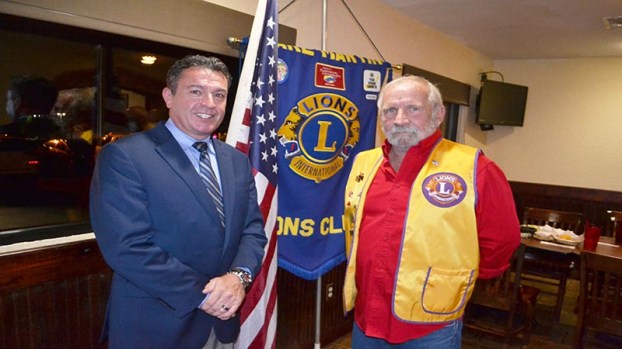 VALLEY — Todd Shackett, president of Southern Union State Community College, spoke to the Valley Lions Club a couple of years ago not long after he’d been named president. Since he was still getting familiar with the new job at that time he talked mostly about his background in workforce development. He was once again the club’s guest speaker Monday evening. This time he had plenty to say about Southern Union and the many opportunities it offers for young people to get ahead in life.

“A degree is nice, but a career is what we are after,” he said. “We counsel our students about careers. We ask them where they would like to be five years from now. We want them to have a sense of fulfillment and that they are providing a good lifestyle for their family.”

Southern Union’s Valley campus began a physical therapy associate’s program under the direction of Dr. Jeff Leatherman on June 1. It’s on pace to be certified in November. An estimated 100 people have applied to be in it and the chance to earn a two-year degree.

Someone who has a two-year degree in physical therapy and who is certified in the field can make upward to $58,000 a year.

“That’s not bad for a two-year investment,” Shackett said. “It’s growing fast, and the pay is out there.”

Another health-related opportunity that’s out there is the position of medical assistant technician. It’s being offered right now at the Valley campus.

“A medical assistant technician is a very helpful person to have in an office setting,” Shackett said. “We’re getting from 10 to 16 students per semester enrolling in it.”

Shackett made the case that Southern Union needs to pay more attention to developing its campus in Valley. What’s there now is on a 100-acre site. There’s plenty of room for growth. “The campuses in Wadley and Opelika are beautiful,” Shjackett said. “By comparison, Valley has been overlooked.”

Improvements are being made incrementally. The student lounge, for example, has been re-done. Some bulky TVs with VCRs were removed in favor of 21st-century technology. State Representative Debbie Wood presented Southern Union with a $5,000 check to help with that upgrade.

“We are now trying to give the same attention to Valley that we have been giving the other campuses,” Shackett said. “We are here for the community and are open to ideas on what we can do.”

Shackett said that enrollment was down approximately 10 percent because of the COVID-19 pandemic.

“I am pleased by the way our staff has responded to this crisis,” he said. “We have made a quick transition to online education. Out of our total enrollment of 4,000 students, we now have around 2,500 virtual students. Rather than being in a classroom on campus, we have a streaming video you can watch. Teachers are recording their lessons.”

Before COVID hit, Shackett was taking part in an outreach effort known as Pizza with the President. Once a month, he’d have lunch with a group of 15 students or so at each of the three campuses.

“I was always asking them what we could do to make their experience at Southern Union more beneficial for them. They were good about giving us feedback. They’d frequently tell us they wanted more activities.”

Sports was an activity frequently mentioned. That’s being answered by introducing new sports teams for the Opelika campus. Men’s and women’s golf teams will be starting next fall and cross country will be introduced the year after that.

“We will eventually have sports on all three campuses,” Shackett said. “It’s something that’s growing in popularity.”

The Valley campus is addressing the needs of working professionals by having Saturday classes.

“We will expand it as the demand for it grows,” Shackett said. “Our Pathways program is really growing. It’s a collaboration between us and Auburn University. The student is co-enrolled at both schools. They can get Auburn credits at Southern Union prices, The students really like saving the money they can by doing this. Another benefit is sitting in a classroom with 20 students rather than 400. We have similar arrangements with Troy University and Jacksonville State.”

The Pathways program started with three courses — it’s now up to 11.

Auburn and Southern Union are looking to collaborate on an aviation program in the future.

“We have a shortage of pilots,” Shackett said. “There’s an even greater shortage of aviation mechanics. We are talking about six-figure salaries and early retirement when you are into this. We are also looking at veterinary medicine.”

Shackett said community colleges are in the final stages of a Aspire 2020 program and are looking forward to Aspire 2030. Physical therapy is an example of a course that came out of Aspire 2020.

“We will be working with economic development professionals on this,” Shackett said. “We want to know what we can do to better serve our community and our students.”

For the immediate future, Shackett said he is looking at building a new academic center for the Opelika campus, which would cost around $35 million. Shackett said the school could come up with around $23 million toward this goal.

A new academic center would allow the Opelika campus to be centralized. Courses such as cosmetology and massage therapy are being offered downtown rather than on campus.

“We want to put people in the seats and to create careers for people,” he said. “We would love for you to visit the Valley campus and to see what we are doing there. We are here to serve. We want to hear from you.”

Shackett said that community college education plays an important role in community growth. “Any industry that’s planning an expansion wants to know the kind of workforce development you have in your town,” he said. “The opportunity is out there for young people with trained skills. Some students with two-year degrees are now making as much, or more, as some engineers with four or five years of experience. Someone with an injection molding degree from Southern Union can make $60,000 a year and can pay back in months what their education costs them. It could take years for someone with a degree from a major university to pay back the cost of their college education.”

Shackett said it could cost $400,000 to pay off your student loans at a place like Harvard. Some students take on that kind of debt just to have jobs as public school teachers. On the salary they will be getting, there’s no way they can pay back the cost of their education.

“Going to a community college like Southern Union and getting a degree in two years is much better. It’s a no-brainer,” he said. “You get a degree in a field where there’s demand, and you’re set for life.”

VALLEY — Team WHIP (Working to Help those In Pink) is celebrating its fifth anniversary this month. The 501(c)3 non-profit... read more