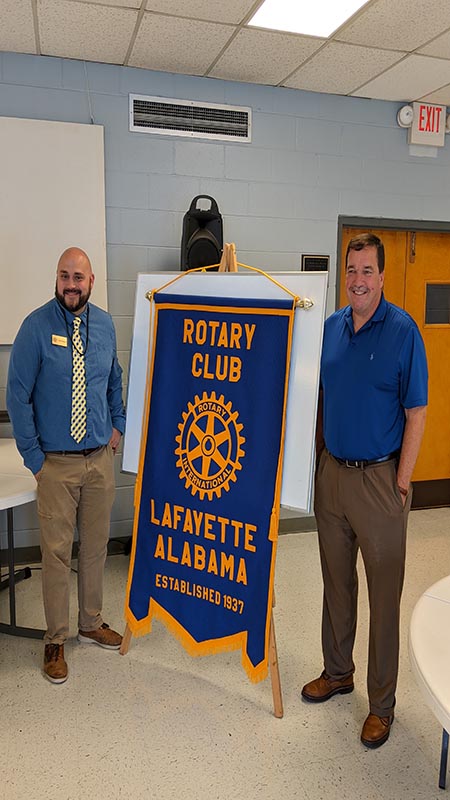 Early in his career, Tyler Nelson served in the United States Army, serving for eight years. In those eight years, he was deployed to Iraq twice, seeing action in Baghdad.

Nelson was honorably discharged in 2011 and now is working as the Director of Technical and Career Services at Southern Union’s Opelika Campus, which is what he spoke about on Tuesday to the LaFayette Rotary Club.

“Because I am a Chambers County native, I really wanted to touch base with you guys,” Nelson said. “When I start looking at the numbers, I wish there was more involvement with Southern Union and Chambers County.”

According to Nelson’s research, Chambers County is at a 23 percent poverty rate. Nelson laid out a couple of ways that Southern Union would be able to help drop that number.

“One thing we have to do as good stewards to our community, as community college leaders, is to influence people to start going toward higher-paying jobs, higher-wage jobs, higher demand jobs, and getting those people out of the poverty gap and into something a little bit more fruitful,” Nelson said. “I want Southern Union to be a good steward to Chambers County.”

Both Chambers and Lee Counties have a lot of manufacturing jobs, and Nelson wants students coming out of high school to look at those jobs because they can turn into a career.

“When I graduated from Auburn University, my first job was at Beulah High School. My very first salary after four years of college was $36,000 a year. That’s not very good,” Nelson said. “Everyone always told me to go get that four-year degree or you’re never going to make money. I was telling my students that too, but is that the case for everybody? When I start looking at some of the people, I’m seeing 19-year-olds graduate with a two-year degree in mechatronics making $30 an hour ($62,400 a year). That’s almost double what I was making and that’s not including any overtime.”

Nelson wants students to understand that getting a degree is important, but it doesn’t have to be a four-year degree.

“One of the biggest issues that we’ve encountered is a lot of people kind of turn their nose up at technical education, even though you can get a two-year degree and make that much money,” Nelson said.

As the Director of Technical and Career Services, Nelson is trying to find a career for his students, not just a job.

“I’m not interested in jobs. Jobs are something that you’re going to leave eventually,” Nelson said. “A career is something you can grow and build.”

After finding students that are interested in technical jobs, Nelson tries to get them an internship, co-op or find someone they can shadow so students can see what an actual day on the job would be like.

“We’re always looking for places to place our students because that’s where they learn,” Nelson said. “If I have a heating and air guy, of course he’s going to learn in our labs, but he’s going to learn what he’s exposed to. If we have them exposed to the real world where they’re going to actually see these problems that they’re going to face every day, it makes learning not just more interesting but effective.”

Applications for “Path to the Plains” can be found on Southern Union’s website.